The Keith family is one of the oldest of southeastern Massachusetts. Its founder in America was Rev. James Keith, born in 1644, who came to America, landing in Boston in 1662. He became minister of the Bridgewater Church, where he administered to the spiritual needs of the people for half a century. He died July 23, 1719. He was twice married. His first wife was Susannah Edson, daughter of Deacon Samuel Edson, and their children were:

Ephraim Keith, son of Joseph, born in Bridgewater in 1707, was graduated from Harvard University in 1729. He was known as Ephraim Keith, Esq., and was a man of prominence in the town. In 1732 he married Sarah Washburn, daughter of Israel Washburn, and they located in Titicut, near the Middleboro line, where he was the owner of a tract of land. In that town they passed the remainder of their days, and there both died. Their children were:

Solomon Keith, son of Ephraim, was born on the farm in Bridgewater March 24, 1749, and he owned land and followed farming in that locality. During the great struggle for independence he performed a patriot’s duty, enlisting in March, 1770, in Col. Edward Mitchel’s regiment, and went to Bristol, R. I. Again in 1780 in Maj. Eliphalet Gary’s regiment he went to Tiverton. He died Nov. 14, 1822-23, and was buried in the South street cemetery, Bridgewater. In 1777 he married Lois Cary, daughter of Jonathan Cary, and she died July 14, 1847, at the age of ninety-one years, and was buried in the same cemetery. Their children were:

Solomon Keith (2), son of Solomon, was born on the old homestead in 1783. His education was acquired in the local schools, and he then learned the trade of ship carpenter, which he followed for several years in Duxbury. He later became an extensive dealer in ship timber and lumber, buying large timber tracts’, converting the timber into ship lumber. He made his home in Bridgewater, and there he died Sept. 17, 1832, and was laid to rest in the family plot in the South street cemetery. He married Lucinda Keith, born in 1785, who died April 15, 1858, daughter of Salmon and Chloe (Wilbor) Keith. When her husband passed away leaving her with a large family she cheerfully took up the burden and trained her children to honorable manhood and woman-hood. These children were:

Lafayette Keith, son of Solomon (2), was born at the old Keith home in Bridgewater, Oct. 21, 1824, and received his education in the district schools and Bridgewater Academy. He was but eight years old when his father died, and under the fostering care of his devoted mother he was trained to high principles of integrity and morality which have characterized his whole life. At an early age he went to work in the cotton factory owned by Ephraim Horton, and when the mill was sold and converted into a tack manufacturing plant he worked there from 1837 to 1841. He then began to learn the carpenter’s trade with Col. Oliver Eaton, of Middleboro, and after serving his apprenticeship he worked for his brother Ambrose as a journeyman for some time. Until 1854 he worked at his trade and then received the appointment of postmaster of Bridgewater. This office he filled with credit to himself and with satisfaction to its patrons until 1862, when he resigned to enter the United States revenue service as assistant assessor, under E. S. Beals, of Weymouth, receiving his commission from Gov. George S. Boutwell, secretary of the treasury. His field of operation included all the Bridgewaters. When the law was changed in 1873 he became assistant revenue collector, serving under Luther S. Leach, C. B. H. Fessenden, Charles W. Slack, of Boston, E. P. Pillsbury and John F. Fitzgerald, all internal revenue collectors of Boston. His field embraced all the towns from Boston to the Rhode Island State line. He continued in that capacity until 1890, having served the United States government faithfully for upward of forty years.

Mr. Keith has also been active in local affairs, having filled the office of selectman of Bridgewater. He served as a member of the school committee, and as overseer of the poor, and for a quarter of a century was secretary of the Plymouth County Agricultural Society. He was one of the organizers of the Bridgewater Savings Bank, established in 1872, and one of its first trustees, and has been its president for a long term of years.

In politics Mr. Keith was a Democrat until the time of the Civil war, when he became a Republican, and he has voted with that party ever since.

On April 13, 1858, Mr. Keith was married in New York City to Mary Keith Eaton, born in Middleboro, Mass., June 7, 1833, daughter of Col. Oliver and Diana Williams (Eaton) Eaton. She passed away Nov. 27, 1899, after a happy married life of forty-one years, and is buried in Mount Prospect cemetery. She was a member of the Congregational Church. The only child of this union, Clarissa Eaton Keith, was educated in the local schools, high school and academy, and also in music and painting, and she has been a successful teacher of the last named branches. She belongs to the Congregational Church. Through her Revolutionary ancestry she has been admitted into the Deborah Sampson Chapter, D. A. R., of Brockton. Mr. Keith is a member of the Historical Society of Bridgewater. He attends the Congregational Church, and is liberal in his views.

Vassel Keith, son of Solomon (2), was born at the Keith home Dec. 25, 1808, and grew to manhood in his native town, attending the common schools. He learned the carpenter’s trade with Hartwell Keith, and worked as a journeyman in New Bedford and Fairhaven, Mass. He later was associated with his brother Ambrose Keith in the building business, at which he continued to work during his active life. He made his home on the homestead, also to some extent engaged in farming. He died there Nov. 10, 1889, and was laid to rest in Mount Prospect cemetery. Mr. Keith attended the Congregational Church. In politics he was a Democrat up to the Civil war, when he became a supporter of Lincoln, and ever after voted the Republican ticket. On May 27, 1827, he married Cornelia Fobes,, who died at the home of her son, Roland M. Keith, Aug. 13, 1897, at the age of ninety years, and was laid to rest beside her husband in Mount Prospect cemetery. She was active to the last, possessing all her faculties, and was steadfast in her devotion to the Congregational Church. To Vassel Keith and his wife were born three children: 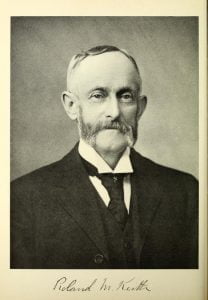 Roland Manning Keith, son of Vassel, was born on his father’s farm March 16, 1847. He attended the local schools, Middleboro Academy, and the Pratt free school in North Middleboro. After leaving school he learned the carpenter’s trade with his uncle Ambrose, after which he worked for a time as a journeyman, and later formed a partnership with his uncle Ambrose, which continued until the latter’s death, in 1888. Since then Mr. Keith has been engaged in contracting and building alone.

Mr. Keith is a stanch Republican, and in 1880 he was elected a member of the Republican town committee, which office he held until 1908, and for the last six years he was chair-man of the committee. He has been delegate to various conventions each year, and can always be depended upon to work for his party. It is generally acknowledged that by his hard work at election time he has been able to get out a larger percentage of the Republican vote in Bridgewater than has been polled in any other town in the State. In 1906 he was nominated as a candidate of the Republicans of the Bridgewaters for representative to the lower house of the General Court, and was elected by the largest majority ever given to a candidate for that office, running far ahead of his ticket. In 1907 he was again elected by a much larger majority, and in 1908 he was nominated as a candidate for the State Senate from the Second Plymouth district. At the election following he received a still larger majority; and he has since been annually reelected to the State Senate. During his work as representative he has taken quite an active part in the work of the General Court, and done much for his towns as well as for the State. He introduced the bill which transferred the Bridgewater Academy, until then governed by a board of trustees, to the town of Bridgewater; also the bill granting Alexander K. Ripley a bounty on account of the Civil war; and was the father of the bill which carried with it an appropriation of $175,000 for the new dormitory for the State normal school at Bridgewater, and the bill for the cranberry experimental station at Wareham, for which $15,000 was appropriated. Mr. Keith was a member of the committee on Labor in 1907, and has been clerk of the committee on Fisheries and Game, and of that on Prisons. In the Senate he has been chairman of the committee on Fisheries and Game, and a member of the committee – on Prisons, Street Railways, Agriculture and Elections. In 1911 he was elected selectman, assessor and overseer of the poor of Bridgewater. He is a member of the Plymouth County Agricultural Society. In his church views he is liberal. Fraternally Senator Keith is a Mason, holding membership in Fellowship Lodge, A. F. & A. M., and in Harmony Chapter, R. A. M., of Bridgewater.

In West Bridgewater Mr. Keith married Luciette Snell, daughter of Nahum P. and Lucy A. (Howard) Snell, who died Aug. 19, 1904, and was buried in Mount Prospect cemetery, Bridgewater. They had two children:

Solomon Keith, son of Solomon (2) and brother of the Hon. Lafayette Keith, was born on the homestead farm at Bridgewater May 25, 1817. He attended the local schools at Titicut, and as a young man learned the trade of carpenter, at which he worked during his active life with his brother Ambrose. During the winter season he worked in the cotton gin works of Carver & Washburn. He was a man well known and very highly respected, and was an active member of the Congregational Church. In politics he was a stanch Republican, and while he never sought office for himself he was always deeply interested in his party’s success, and was a daily reader of the Boston Journal. He died at his home on Summer street, Bridgewater, Aug. 31, 1883, and was buried in Mount Prospect cemetery.

Mr. Keith married (second) June 2, 1864, Julia A. Wentworth, daughter of Hiram and Anna (Leach) Wentworth. She is still living, and resides on the homestead on Summer street. Two children were born to the second marriage: