COUCH (Taunton family). The family bearing this name at Taunton whose representative head is now Leonard Crocker Couch, Esq., who since boyhood has been a resident of the city, occupied in mechanical and business lines, and for years one of the substantial men and useful citizens of the community, is one of long and honorable standing in the neighboring State of Connecticut and of distinction in our country. And through its Taunton alliance of a generation ago – that of Maj. Gen. Darius Nash Couch, of Civil war fame, the father of the present Leonard Crocker Couch just alluded to – with the family of Crockers, it is connected with some of the first families of Ancient Taunton and of the Bay State, among them the Leonards.

Simon Couch, ancestor of the Taunton family of the name, appears as a freeman of Fairfield, Conn., in October, 1664. From manuscript in the possession of a descendant a tradition is found that Thomas and Simon Couch ran away from England, secreting themselves on board a vessel; sailed for America; that they landed at New Haven, where they separated, Thomas going to the east and Simon westward as far as Greens Farms, etc. Simon Couch married Mary, daughter of Francis Andrews, of Bankside. He became a large land-holder at Greens Farms. His will was probated in 1689. He was buried on land belonging to him at Frost Point, looking out over the sound, which he had set apart as a family burying ground and which was long known as the Couch Burial Hill. His wife survived him, dying in 1691. In his will are mentioned children:

These generations more in detail and in regular order follow.

Simon Couch (2) received by the will of his father the greater part of the homestead and became a prominent man at Greens Farms, active in political, church and educational affairs. He owned nearly the entire district which took his name, Couch’s Hill. He married Abigail Sturges, daughter of John, member of a notable Fairfield family. His children mentioned in his will, which was made March 2, 1712-13, and probated in April following, were:

Thomas Couch, son of Simon (2), married Dec. 17, 1721, Sarah, daughter of Gideon Allen. He settled at Greens Farms. His children were:

Of these, Simon settled in Redding, Conn., on Umpawaug Hill. He married Eleanor, daughter of Jonathan Nash; two of their sons, Simon and Jessup, both graduates of Yale, removed to Ohio, Simon settling at Marion, in the practice of medicine, and Jessup at Chillicothe, in the practice of law, beginning his professional career in 1804 and becoming judge of the Supreme court of Ohio in 1815; in the war of 1812 he was aide-de-camp to Governor Meigs of Ohio, and was the bearer of dispatches to General Hull.

Thomas Couch (3), born Feb. 12, 1751, married April 2, 1772, Sarah, daughter of Jonathan Nash, of Fairfield, Conn. Mr. Couch settled in Redding about the time his brother Simon did. “At the outbreak of the Revolution he enlisted in the Patriot army and was one of the band of heroes present with Montgomery at the siege of Quebec. He left his wife with their young children in Fairfield. When Tryon moved on that town Mrs. Couch had what furniture and grain she could gather put in an ox-cart drawn by two yoke of oxen and started for Redding, where she owned land in her own right. She followed on horseback, carrying her two children in her arms. At the close of the war her husband joined her in Redding, where they continued to live through the rest of their lives.” He died March 16, 1817. Their children were: 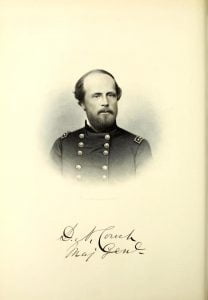 Dakius Nash Couch, son of Jonathan and Betsey (Penney) Couch, was born July 23, 1822, in the southeast part of Putnam county, N. Y., and in due time entered the United States military academy, from which he was graduated in 1846. In his class were many who became commanders of note on both sides in the Civil war, among them being Generals Grant, McClellan, Franklin, Reno, Hancock, Foster, Storeman, Burnside and “Stonewall” Jackson. On his graduation from West Point he was assigned to the 4th Artillery, with which he served in the Mexican war, gaining the brevet of first lieutenant, 23d of February, 1847, for gallant conduct at Buena Vista. He received his full commission on Dec. 4, served against the Seminoles in 1849-50, and in 1853, when on leave of absence, made an exploring expedition into Mexico, which is thus mentioned in the United States Senate reports of “Explorations and Surveys for a Railroad from the Mississippi River to the Pacific Ocean” (1853-56), Vol. IX: “Should there be two species, and the smaller not named, I shall propose to call it C. Couch, in honor of its indefatigable discoverer, Lieut. D. N. Couch, who at his own risk and cost undertook a journey into northern Mexico, when the country was swarming with bands of marauders, and made large collections in all branches of zoology, which have furnished a great amount of information respecting the natural history of our borders, and the geographical distribution of vertebrata generally.” Lieutenant Couch wrote an account of his expedition entitled “Notes of Travel,” but it is still in manuscript.

In 1861, on the outbreak of the war, Lieutenant Couch raised the 7th Massachusetts Regiment, of which he was appointed colonel and which he took to Washington in July of that year. He was appointed brigadier general – to date from May 17, 1861, and served at the defences of Washington during the next year, and was in command of the 1st Division of the 4th Army Corps in McClellan’s Peninsular campaign. He distinguished himself at the battles of Fair Oaks and Malvern Hill. In the battle of Williamsburg he made the successful reconnaissance by which McClellan learned that the enemy had retired. At Malvern Hill he commanded the left of the army. On July 4, 1862, General Couch was promoted to major general of volunteers and commanded a division in Pope’s army on the retreat from Manassas, was in the attack on Maryland Heights at Harper’s Ferry, Sept. 17, 1862, and on the two following days followed Lee’s retreat to Antietam. In October he was put in command of the 2d Corps, and was in the Rappahannock campaign in October and November. He commanded the same corps until June, 1863, being engaged in the battles of Fredericksburg and Chancellorsville in the previous December. From June 11, 1863, until Dec. 1, 1864, he commanded the Department of the Susquehanna and was engaged in reorganizing the militia of Pennsylvania. On Dec. 15, 1864, he was at Nashville, Tenn., where he assembled and successfully carried Hood’s extreme left. Toward the close of the war General Couch was in Schofield’s army in North Carolina, and he resigned from the army May 26, 1865. During his service he was wounded several times, and had horses shot under him.

General Couch was the unsuccessful Democratic candidate for governor of Massachusetts in 1865. He was collector of the port of Boston from Oct. 1, 1866, to March 4, 1867, when the failure of the Senate to confirm his appointment forced him to vacate the office. He became president of a Virginia Mining and Manufacturing Company in 1867, but subsequently removed to Norwalk, Conn., where he afterward resided. He was quartermaster-general of the State of Connecticut in 1877-78, and adjutant general in 1883-84.

In 1854 General Couch married Mary Caroline, eldest daughter of Samuel L. Crocker, of Taunton, Mass. The children born to them were:

Mrs. Mary Caroline (Crocker) Couch was a direct descendant of the distinguished Crocker and Leonard families of Taunton, the progenitors of which were William Crocker, of Scituate, and James Leonard, of Lynn and Taunton; the house of Crocker or Croker being an ancient family seated at Crokers Hele and Crokern Foe, in Devonshire, England, and by marriage with the heiress of Churchill became possessed of Lineham; while the Leonards, it has been said, are of the family of Lennard, Lord Dacre, one of the most distinguished families of the nobility in the United Kingdom and descended in two lines from Edward III.

Rev. Josiah Crocker, the third Josiah in direct line from William Crocker, of Scituate, and a graduate of Harvard College, class of 1738, became the settled pastor of the church in Taunton, and continued there in the active ministry for upward of twenty years. From this Rev. Josiah Crocker the descent of Leonard Crocker Couch of Taunton is through Josiah Crocker and his wife Abigail (Leonard), Samuel L. Crocker and wife Hannah (Thomas) and Mary Caroline (Crocker) Couch; and through Abigail (Leonard) Crocker his descent from James Leonard, of Lynn and Taunton, is through James (2), James (3), Stephen and Mai. Zephaniah Leonard.

Leonard Crocker Couch, son of Maj. Gen. Darius Nash and Mary Caroline (Crocker) Couch, was born Sept. 26, 1856, in the city of Brooklyn, N. Y. He acquired his education at Norwalk, Conn., and in 1875 he went to New England, and in the town of his maternal ancestors and the scenes of his father’s earlier operations, at Taunton, entered the employ of the Taunton Locomotive Manufacturing Company, beginning there the trade of a machinist. By his diligence and application he soon won promotion after promotion, until he became superintendent of the locomotive department of the plant and had charge of the drafting room. He continued his services with this concern until they discontinued the department of locomotive building. His next experience, and immediately following his connection with the Taunton Locomotive Manufacturing Company, was as chief draftsman for the Fitchburg Railroad Company, in the locomotive department. With this company he remained one year. In 1890, after the death of the late Andrew S. Briggs, of Taunton, Mr. Couch bought the insurance business formerly carried on by that gentleman, and has since been actively engaged in its conduct. Mr. Couch was park commissioner in 1894, in 1896 and again took that office in 1910, being now chairman of the board; he was license commissioner in 1894 and 1895. He was a member of the board of aldermen from 1900 to 1904 inclusive, and in the council in 1905 and 1906. He is a member of the Aztec Club of 1847, of the Sons of the American Revolution and of the Sons of Veterans, U. S. A.; he has been a member of the last named order for twenty years, and was commander of the Massachusetts Division in 1898.