Walter Lyman French. The gentleman whose name introduces this article is one of Brockton’s enterprising business men, one who has achieved marked success in various branches of industry and trade. He was born in Brockton (then North Bridgewater) May 4, 1843, son of the late Francis M. and. Nancy L. (Blake) French.

Tradition says the name of French originated in France years and years ago, but no one knows exactly when, and was at first de Freyne or de Fraxinus, then Frene or Freigne. Although it is supposed to have been first in France, it is frequently found mentioned in the records of various countries of the Old World. In the New World, among the founders of our republic was Thomas French, or “thomas franche,” as he wrote it, who, perhaps, came on the ship “Lion” with John, son of Governor Winthrop. Francis French came in the ship “Defence” in 1635, and settled at Derby, Conn. Twenty years later Jacob French was a freeman of Weymouth, Mass. Edward French was living at Ipswich, Mass., in 1630. John French, of Braintree, Mass., in 1640, called his son, born on the ocean, Dependence, “in acknowledgement of the good providence of God, on whose protection they depended.” The name also frequently appears in connection with Revolutionary times, William French, born in 1753, of Brattleboro, Vt., being called the first martyr of American independence, having been shot at Westminster March 13, 1775, “by the cruel tools of George ye 3d, in the courthouse at 11 o’clock at night, in the 22d yr. of his age.” Characteristics of the French family are perseverance, wisdom, and prudence in counsel; no difficulties discourage them, and they are given to hospitality.

Most of the Frenches of the Bridgewaters and vicinity descend from John French, of Braintree, alluded to in the foregoing. This John French was born about 1612, in England. Before coming to Braintree, of which point he was an inhabitant in 1640, and a freeman in 1644, he had been a short time at Dorchester. He died Aug. 16, 1692, aged about eighty. His wife Grace died Feb. 28, 1680-81, aged fifty-nine years.

William French, perhaps of that part of Bridgewater now Abington, married in 1773 Alice, daughter of Ezekiel Washburn, and their children were:

William French, son of William, was born Sept. 9, 1787, and came from Abington to North Bridgewater. He married Nov. 1, 1810, Ann Howard Wales, daughter of John Wales, and their children were:

William French was a shoemaker by trade, and was in a small way a manufacturer of boots. He lived to be eighty-four years of age. He was one of the first in this part of the State to embrace the Swedenborgian faith, and helped to found the Church of the New Jerusalem in Brockton, always taking a great interest in its welfare. In political faith he was an old-line Whig, and was always deeply interested in his party, and in public affairs generally.

Francis Mortimer French, son of William and Ann Howard (Wales) French, was born in North Bridgewater July 20, 1811, and after acquiring his early education in the common schools of his native town learned the trade of shoemaking. When he was twenty years of age he engaged in the manufacture of shoes, his factory standing on the site of the store now owned by his son Walter L., and with the exception of two and one-half years, when he was a bookkeeper for the late William F. Brett, he was in the shoe business some forty years. He was afterward associated with his son in various enterprises, including the grocery business. In politics he was identified with the Republicans, voting originally with the Whigs. He cast his first Presidential vote for Henry Clay. He was an aide to the marshal who headed the deputation escorting Hon. John Quincy Adams from – Randolph to North Bridgewater, where on Nov. 6, 1844, the venerable ex-President delivered a lecture. Mr. French officiated as justice of the peace for nearly fifty years, holding his commission under the various governors during that period and up to the time of his death. He was town treasurer for several years, and was at one time nominated for the State Legislature. A Mason of high standing, he was a member of Paul Revere Lodge, A. F. & A. M., of which he was a past master; Satueket Chapter, R. A. M.; Bay State Commandery, K. T., of Brockton, in which he had modestly declined honors. On Dec. 25, 1837, Mr. French, married Nancy Lucinda, daughter of Elias Blake, of Wrentham, Mass. She died June 23, 1846, leaving two sons: 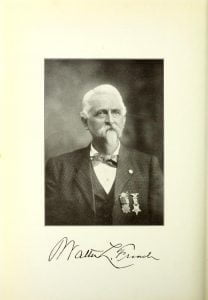 Walter Lyman French, born May 4, 1843, in North Bridgewater (now Brockton), acquired his early educational training in the common schools of his native town, later taking more advanced studies at the Loomis Academy and at Hunt’s Academy, in the same town. He went to work in the grocery store of William F. Brett when he was but twelve years old, and was there employed some two years, returning then to school for a while. He was next employed in the shoe factory of French & Packard (of which firm his father was the senior member), and remained there until the breaking out of the Civil war. In 1861, loyal to his principles, he enlisted in Company F, 12th Mass. V. I., and was waiter for Captain Hichborn until the regiment was mustered into service at Fort Warren. On Aug. 9, 1862, he enlisted in the U. S. navy and was assigned to the U. S. steamship “Hunchback,” of the North Atlantic squadron. He received his discharge Aug. 15, 1863. During his service he took part in a number of important engagements, including those at Newbern (siege), and at Little Washington, both in North Carolina. After his second discharge Mr. French attempted to enlist again, but failed to pass the physical examination.

In 1864 Mr. French became a member of the firm of French & Packard, which was then changed to French, Packard & Sons, the factory being the present store on North Main street, which was built about 1848. Their shoes were sold mostly in the South, and owing to the condition of that part of the country during the Civil war they met with severe losses, and the partnership was dissolved a year later. Mr. French was then employed in Porter & Packard’s shoe factory as an upper leather cutter for about six months. His father’s partner dying about this time, he entered the business, the firm becoming F. M. & W. L. French, and until 1870 they were engaged in the manufacture of the cheaper grades of shoes. In the year named they retired from the shoe business, and father and son started in the grocery business, for some time being the leading grocers of the place. At the time of the great horse distemper in 1870 they delivered their goods with a team of oxen. On account of ill health they went out of business in 1879, but started again in 1880, and were together until 1890, when the elder Mr. French retired. During this time they had a very successful career. Mr. Walter L. French then managed the business alone for several years, also being engaged in the brokerage business and dealing in leather remnants, continuing in the grocery and brokerage business until about 1899, and in the leather remnant business until about 1903. In the latter business he was senior member of the firm of W. L. French & Co., which company was organized in 1895, his partners being F. L. Price, who had been a member of the firm for several years, when N. C. Clark became identified with the firm. In 1903 Mr. French withdrew from the firm, which then became N. C. Clark & Co. Mr. French was also extensively engaged in farming for a number of years, owning about three hundred acres of land, from which he sold on an average two hundred or three hundred cords of wood per year. In 1906 Mr. French engaged in the welting and rand business, having a factory at the corner of North Main and Elliott streets, retiring from this business in 1910. Mr. French was one of the original incorporators of the Brockton Mowing Machine Cutter Bar Company, incorporated in 1909, with a capital stock of $50,000, of which corporation he is president.

In political faith Mr. French is a Republican, and has served as a member of the city council from Ward Seven. He is a Mason, holding membership in Paul Revere Lodge, A. F. & A. M., of Brockton. He belongs to Fletcher Webster Post, No. 13, G. A. R., of which he has been senior vice commander; and he is a charter member of Appomattox Command, No. 22, Union Veterans’ Union, of Brockton, which order he was instrumental in organizing, and in which he has taken a very active and prominent part, having been commander of the Massachusetts Department; at Saratoga in 1907 he was made commander-in-chief of the national organization, at Toledo, Ohio, in 1908, was reelected, and again in 1909 at Washington, D. C, was reelected to that office. Mr. French is also a member of the Commercial Club, and a life member of the Bridgewater Historical Society. He and his family are active in the support of the Porter Congregational Church.

On April 14, 1864, Mr. French was united in marriage with Lucy Ames, daughter of Daniel and Sally Packard (Eames) Ames, of North Bridgewater, and a descendant of one of the earliest settlers in the town of Bridgewater. Mrs. French, who was an intelligent and capable woman, died Sept. 29, 1906. Mr. and Mrs. French had one daughter, Ellen Lucinda, born Sept. 11, 1868, who married N. Clarence Clark, of East Dennis, Mass., and they reside in Brockton; they are the parents of a son, Forest Sampson, born April 26, 1892.

Mr. French is a worthy representative of one of the community’s early settled families, a progressive and enterprising citizen and business man, enjoying the respect and esteem of all who know him. He first began business in 1864, hence is the oldest business man in point of continued activity in Brockton.