ABISHAI MILLER, than whom no man connected with the iron industry in New England stood higher in reputation for skill and efficiency in workmanship, and at the time of his death, Jan. 30, 1883, president of the Atlantic Works, which he had helped to organize and in the prosperity of which he had long been a vital factor, was born June 22, 1809, in Fall Brook, Middleboro, Mass., son of John and Susanna (Sparrow) Miller, and a member of a family which located in that town in the seventeenth century.

John Miller, a native of England, born in 1624, was a member of the Grand Inquest at Middleboro in 1672. He was among the proprietors of the Twenty-six Men’s Purchase (1661-62) at their meeting in 1677. Previous to April 29, 1678, he bought a house lot of Edward Gray. He was the owner of lot No. 154 in the South Purchase (1673), and was one of the owners of the Sixteen Shilling Purchase (1675). Mr. Miller lived on Thompson street not far from the brook near the house of the late Elijah Shaw, in Middleboro. He died May 11, 1720, in the ninety-seventh year of his age. His monument stands in the cemetery at “The ‘ Green,” where rest the remains of six or more generations of his descendants. The Christian name of the wife of Mr. Miller was Mercy, and their children were: 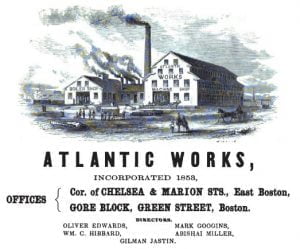 Abishai Miller, son of John (5), born June 22, 1809, in Fall Brook, Middleboro, Mass., was educated in the common schools of Middleboro. He was a mere lad when his father died, and he left his home and went to Westboro and Taunton to learn the machinist’s trade. He devoted himself to that line of work until he had thoroughly mastered it in all its details, and it was said of him that he was one of the best machinists in New England. A man of his mechanical genius could not long remain in a subordinate position. In 1837 he entered the service of Otis Tufts (at that time proprietor of a machine shop on Bloomfield street, Boston, but afterward known as one of the most successful engine builders in New England), and continued in his employ in that location and in East Boston until 1853. During this period he superintended the construction of much important work, and had as apprentices many young men who have become justly celebrated in the line of iron manufacture, and shown the excellence of their training. In 1853 Mr. Miller, with several other enterprising mechanics, organized the Atlantic Works, and obtained a charter from the Legislature. They put into this venture all their savings, and began the difficult task of making a place for their company in the business world. They purchased land in East Boston and erected buildings thereon for machine, blacksmith and boiler shops, and purchased tools for these several departments. Mr. Miller became superintendent of construction, and, by dint of hard work, self-sacrifice and the utmost economy, soon succeeded in establishing a reputation, the business and facilities steadily increasing. About 1859 Mr. Miller retired from active business and went to Middleboro to take a much needed rest. At this time he erected a fine residence on the old homestead at Fall Brook, and here his friends found him happy and contented. When the Civil war broke out the Atlantic Works secured a contract for building one of the now famous “monitors,” and at the earnest solicitation of his associates in the business he returned to his old place as superintendent, and during the four years following a busier man could hardly be found in Boston. Under his direction were built the monitors “Casco” and “Nantucket,” the turrets for the monitors “Monadnock,” “Agamenticus,” “Passaconaway” and “Shackamakon,” and the machinery for the gunboats “Sagamore,” “Canandaigua,” “Sassacus,” and “Osceola”; also for the U.S. man of war “Nyphon.” At the close of the war Mr. Miller again retired, although remaining on the board of directors of the company until 1876, when, upon the death of the president, he was elected, to that office, a position he filled until his death, in East Boston, Jan. 30, 1883. He was buried in Green cemetery in Middleboro, where several generations of the family have been interred.

As a business man and mechanic few surpassed Mr. Miller, and the success and prosperity of the Atlantic Works was largely due to his management and skill. In private and social life he was greatly beloved. He never betrayed a friend nor deceived an enemy. His nature was positive. Strong in his likes and dislikes, he was always just and charitable. A friend in want or in trouble found in him a ready helper. It is said that the truly great man always reveres his mother, and Mr. Miller possessed that characteristic in a large degree, showing his mother marked tenderness and caring for her in his home during the last years of her life. Although he had neither time nor ambition to be active in town affairs, he nevertheless when elected to office filled the position with credit, serving as selectman of Middleboro and in other positions of trust. He attended the Congregational Church, and liberally contributed toward its support. He was essentially a self-made man, and his life was devoted to business, his success being the fruit of mental strength, indomitable will and persevering industry. This did not chill his genial nature, however, and he had a large circle of faithful friends.

Mr. Miller married Julia A. Sparrow, daughter of Edward Sparrow, of Middleboro, and she died many years before him. They are survived by a daughter, Julia H., now the widow of Dr. G. W. Copeland, of Boston.

De. George Walter Copeland was a native of Nova Scotia, born at Pictou, a son of Samuel Copeland. He was educated in his native home, and at Dalhousie College. He took up the study of medicine in the Pennsylvania Medical College, and for a time practiced medicine in that State, later locating in Boston. In 1889 he came to Middleboro, where he was living at the time of his death, April 29, 1896. In politics he was a Republican, and fraternally he was connected with the Masons. Mrs. Copeland, formerly Julia H. Miller, resides in her beautiful home on South Main street, Middleboro. She takes a great interest in the social life of the town, and is a member of Nemasket Chapter, D. A. R., of which she is vice regent; and she was one of the organizers and is a charter member of the Cabot Club. She attends the Congregational Church.