HON. JOHN SAXTON KENT, ex-mayor of the city of Brockton, and one of that city’s leading manufacturers, is as well one of the most enterprising and progressive citizens who have made their way to success in this Commonwealth. Merit commands recognition, and the deserving find doors opening and the way growing plainer as they go onward. In the life of Mr. Kent we have a noble example of the result of pluck, untiring energy and perseverance, combined with natural business acumen, he being the architect of his own successful career, and having acquired, through his own capabilities, a place among the foremost and prosperous shoe manufacturers of the State. Mr. Kent is a native of Brockton, which at the time of his birth was known as North Bridgewater, born April 18, 1860, only son of Patrick and Susan (Saxton) Kent. 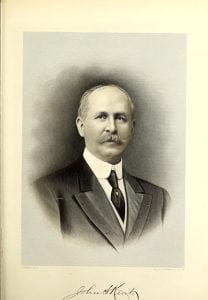 Patrick Kent, the father, came to North Bridgewater in 1854, and has been a respected resident of the community in which his long and industrious life has been spent. For about forty years he was a trusted employee of the well known firm of Howard & Clark, furniture dealers, since which time he has been living retired, enjoying the comforts of life surrounded by his children and grandchildren, and although in his eighty-third year is still possessed of his faculties and good health. Mr. Kent was united in marriage with Susan Saxton, who passed away in Brockton in June, 1905, aged seventy-four years, the mother of three children:

John Saxton Kent, as stated above, was born in North Bridgewater (now Brockton) April 18, 1860, and after attending the public schools and the high school of his native town, graduating from the latter in 1877, he became a student at Bryant & Stratton’s Business College at Boston, where he took a special business course, and from which he was graduated with high honors, attaining in his final examinations a percentage of 100 – the second student of that institution of learning to attain that high rank. Returning to Brockton, at the request of the late Hon. Edward Crocker, then a leading manufacturer and financier, Mr. Kent opened a set of books for the firm of A. S. Porter & Sons, who were at that time extensively engaged in the carriage and livery business, remaining with this concern in the capacity of bookkeeper for a period of about four years, during which time he was also called upon to do much legal work for the firm, members of which were deputy sheriffs of Plymouth county. Resigning his position with this firm in 1883, Mr. Kent then became bookkeeper for Moses A. Packard, one of the well known shoe manufacturers of the city, continuing with Mr. Packard and with the firm of Packard & Grover for a period of about five years in that capacity. The following year he was made superintendent of their shoe factory, which position he filled for about one year. Capt. E. B. Grover then withdrew from the business which on Jan. 1, 1889, was reorganized as M. A. Packard & Co., Mr. Kent and Oliver M. Fisher, who had also been in the employ of Mr. Packard for several years, becoming members of the firm. On March 1, 1898, the business was incorporated under the laws of Massachusetts, with a capital stock of $200,000, as the M. A. Packard Company, at which time Mr. Kent was elected treasurer of the corporation, in which capacity he has since efficiently served. The M. A. Packard Company manufactures what is known as the medium fine grade shoe, which retails for from $3 to $5, their special makes being known as the “Packard” shoe and the “John Mitchell” shoe, which have an extensive sale and are well known all over the country. This firm employs from seven hundred and fifty to eight hundred hands, and has an output of over thirty-six hundred pairs of shoes per day.

Although a thorough business man and devoted to his extensive business affairs, Mr. Kent has, nevertheless, found time to interest himself in the welfare of his native city and to make that interest manifest. In political faith he is a strong advocate of protection, and a firm believer in the principles of the Republican party. In 1886, 1887 and 1888 he was a member of the school committee, and for nine years was a trustee of the public library. In 1906, yielding to the solicitations of his many friends, Mr. Kent became a candidate for the mayoralty of the city, and at the following election was chosen to fill that office, to which he was reelected for two succeeding years, serving his native city as its chief executive during the years 1907, 1908 and 1909, with credit to himself and to the satisfaction of his constituents; although importuned to be a candidate for a fourth term, he declined to be a candidate for another year. Upon retiring from the office of mayor of the city in January, 1910, he was unanimously elected a member of the board of sinking fund commissioners of the city for a term of three years, to succeed the late Baalis Sanford. For a number of years Mr. Kent has taken an active interest in the Brockton hospital, serving for seven years as a member of the executive board and for three years as president of the same. He is one of the vice presidents of the New England Shoe and Leather Association of Boston, of which he has also been a director for several years, and is also a member of the Brockton Shoe Manufacturers’ Association, which he has long served as a member of the executive committee, and of which he was president for one year; he has taken an active and interested part in the work of that organization. Mr. Kent has also been prominently identified with the city’s financial institutions, being a director of the Home National Bank of Brockton, and was one of the original incorporators of the People’s Savings Bank, of which he has also been a trustee for several years, and of which he was clerk of the board of trustees for a period of ten years.

Mr. Kent and his family are consistent members of St. Patrick’s Roman Catholic Church, of Brockton, to which he is liberal in his support. Socially he is an active and valued member of the Commercial Club, of Brockton, which he has served for three years as president, and is also a member of Seville Council, No. 93, Knights of Columbus.

On Sept. 11, 1889, Mr. Kent was united in marriage to Mary Agnes Clark, daughter of Thomas J. and Ellen (Fitzpatrick) Clark, of New Orleans, La., and this happy union has been blessed with children as follows:

Mr. Kent is a courteous, affable gentleman; he is unvaryingly plain and agreeable in his social relations; the friends he makes are fast friends; his private character is without stain, and his name carries no blemish. His usefulness as a citizen extends far outside his business career into various spheres of active beneficence. He has taken an active interest in the growth and development of his native city, and all worthy objects find in him an active worker to that end. Possessed of marked executive ability and untiring energy, the notable success and continual growth of the extensive manufacturing concern with which he has been so actively identified are largely due to his efforts. A forceful and fluent speaker, Mr. Kent is frequently called to the political stump as well as before various bodies, to address them on industrial conditions and affairs of general interest.