Nelson Sherman, who was for many years extensively engaged in agricultural pursuits in the town of Carver, Mass., and is now making his home in the city of Brockton, is regarded as one of the substantial men of Plymouth county. He is a descendant of several of this Commonwealth’s earliest settled and most prominent families, and was born March 14, 1841, in North Carver, son of Henry and Christinai (Crocker) Sherman.

William Sherman, of whom nothing seems known until his appearance among the Pilgrims, he having settled at Plymouth, 1630-34, in 1640-44 removed to Marshfield, which has continued the family seat to the present. He lived first in Duxbury, where he was recorded as a yeoman and planter. He was on the Plymouth list of those able to bear arms in 1643. He was admitted an inhabitant of Marshfield Nov. 23, 1644, and held various town offices. Mr. Sherman made a good record for himself after his arrival in Plymouth, becoming a thrifty husbandman, and left to his children a rich inheritance of lands. Besides the tract purchased at Marshfield he held others at Rochester, part of which is still owned by his descendants. In old age, blessed in his family and his possessions and honored by his neighbors, he died in 1679, and was buried in the family grounds at Marshfield.

In 1638 Mr. Sherman married Prudence Hill, and their children were:

William Sherman (2), son of William, married in 1667 Desire, daughter of Edward Dotey or Doten, a passenger of the “Mayflower.” Mr. Sherman followed farming in Marshfield. He served in the war against King Philip. He died in 1724. His children were born as follows:

William Sherman (3), son of William (2), born April 19, 1672, in Marshfield, Mass., married Feb. 3, 1697, Mary, daughter of Peregrine White, born in December, 1620, on board the “Mayflower,” in Plymouth harbor, the first white child born in Plymouth Colony, and a granddaughter of William White and his wife Ann (Fuller). The children of William and Mary (White) Sherman were:

John Sherman son of William (3), born July 19, 1720, in Marshfield, Mass., married in 1746 Elizabeth Dingley, granddaughter of John Dingley, of Marshfield, a prominent citizen and town officer. The children of John and Elizabeth Sherman were:

Capt. John Sherman (2), son of John, was born June 9, 1762, in Marshfield, Mass., and during his infancy his parents removed to Plymouth, where they resided until he was twelve years of age, then removing to North Carver. In the latter town he was engaged in farming the remainder of his life, and there he died in 1840. On Feb. 25, 1787, he married Lydia Doten, who was born Feb. 13, 1768, daughter of Ebenezer Doten, and a descendant of Edward Doten, who came to America in the “Mayflower.” Their children were:

The father of this family married (second) Lucy (Nelson) Crocker, daughter of Ebenezer Nelson, of North Carver. Mr. Sherman served in the Revolutionary war. He was appointed captain of a company in the 1st Regiment, 1st Brigade, 5th Division of the militia of Massachusetts, his commission being signed by Gov. John Hancock, Oct. 4, 1790, in the fifteenth year of the independence of the United States of America.

Henry Sherman, son of John and Lydia (Doten), was born March 23, 1806, in North Carver, Mass., where his life was spent and where he died Oct. 12, 1895, in the ninetieth year of his age. Like his ancestors he was engaged in agricultural pursuits, and his extensive farm was kept in a good state of cultivation. In his younger days he and his brother Anthony conducted the farm together, until in about 1845, when they divided their interests, and thereafter continued alone. Mr. Sherman owned between three hundred and four hundred acres of land, and was recognized as one of the substantial and successful farmers of the community. He was a very industrious man, and prudent, and as a consequence acquired a good competence. In early life he was an old-line Whig, but during the Civil war allied himself with the Democratic party. In the early forties he served as a representative to the General Court of the State. He was a well read man, and having a good memory was well posted in the general topics of the day, and was the recognized historian of the town. He affiliated with the Congregational Church, and was liberal in his support of all charitable objects. For several years he served as a member of the parish committee of the church. He bore the respect and esteem of the community in which his life was spent, and was frequently called upon to settle estates and disputes which arose among his neighbors, and as he was just in his decisions they were usually accepted as final. Mr. Sherman held the commission of justice of the peace for a number of years. Mr. Sherman married (first) in 1832 Hannah Nelson Crocker, daughter of Eleazer and Lucy (Nelson) Crocker, who died without issue, and he married (second) in 1840 Christinai Crocker, daughter of Heman and Rebecca (Pratt) Crocker, of North Carver, who passed away Nov. 24, 1842, in her native town, aged twenty-seven years, the mother of the following children: 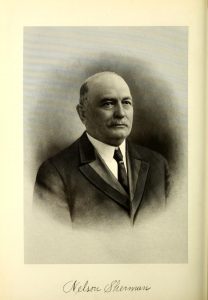 Nelson Sherman, son of Henry and Christinai (Crocker), was born March 14, 1841, in North Carver, Mass., and in the district schools of his native town acquired his early educational training. At the age of about six-teen years he left school and took up farming with his father, with whom he remained for a number of years, during which time, at intervals, he was engaged at shoemaking in various neighboring shoe shops. Mr. Sherman finally engaged in farming on his own account, and in connection with his agricultural pursuits he was extensively engaged in lumbering and in general trading. Possessing a natural business acumen, a keen perception and a tireless energy, Mr. Sherman met with success in his various business ventures, and in 1897, having acquired a comfortable competency, he removed to the city of Brockton, where he has since resided, his time now being occupied in looking after his real estate interests.

In political matters Mr. Sherman is independent, with Republican tendencies, and while a resident of his native town was active in the public affairs of the community, serving as a member of the board of selectmen, overseer of the poor, assessor, moderator, and in various other positions of honor and trust, and was frequently called upon to settle estates, as was his father before him. He also held a commission as justice of the peace for a number of years. Since coming to Brockton he has identified himself with the Economic League, of which he is an active member. Mr. and Mrs. Sherman affiliate with the Unitarian Church, and are liberal in their support of same.

On Feb. 15, 1866, Mr. Sherman was united in marriage with Mary A. Wilbur, daughter of Reuben and Nancy Augusta (Evans) Wilbur, of Taunton, Mass., and this union was blessed with one son, Frank Nelson, who was born Dec. 19, 1869, in North Carver, and after attending the district schools of his native town took a business course at Bryant & Stratton’s business college in Boston; for a time there-after he was in New York, where he was employed by Swift & Co., finally settling in Brockton, where up to a short time prior to his death, which occurred March 7, 1897, in Riverside, Cal., whither he had gone on account of failing health, he had served as assistant to his father-in-law, City Clerk Packard, and also held the commission of justice of the peace. He married Clara Washburn Packard, daughter of DeWitt Clinton Packard, of Brockton, and she passed away May 23, 1903, the mother of three children:

Mrs. Nelson Sherman is an active member of Deborah Sampson Chapter, Daughters of the American Revolution, of Brockton, being eligible to membership in the same through her descent from Elijah Wilbur, of Raynham, who enlisted June 1, 1778, as a private in Capt. Jacob Haskin’s company, Col. John Jacob’s regiment, serving eleven days. The company was detached to guard shore at Freetown for ten days by order of Brig. Gen. George Godfrey.