WASHBURN (Middleboro family). The early home of the Washburns of this section of Massachusetts was at Duxbury and the ancestor at that point sprang from the ancient English family whose seat was at Evesham, which family according to Burke came from the Difford and Great Washborne family. The earliest mention of Washburn at Evesham is in the reigns of Henry III. and Edward I., when the family occupied the Evesham Abbey lands, 1216-1307.

The Washburn name in this country is a distinguished one. Perhaps it is as yet only a tradition that John Washburn, the ancestor of the Washburns here considered, was he who first served as secretary of the Massachusetts Bay Colony. Several governors of our States have borne the Washburn name and at one and the same time four of the name occupied seats in the United States Congress. And the branch of the Massachusetts Washburns seated in Middleboro and vicinity have borne no small part in the annals of the Old Colony and later Commonwealth. Capt. Amos Washburn was in command of a company in the American Revolution; one of his sons, a graduate of Harvard, was a talented lawyer at Middleboro; Edward Washburn, brother of Capt. Amos, was another patriot in the Continental army; and his son, Gen. Abiel Washburn, was one of the leading men of his time in Middleboro, the acknowledged leader of the Federal party, and for thirty-six years held commissions through the different grades of office in the State militia; while Luther, Cyrus and the late Bradford Sumner Washburn, in turn, were substantial citizens of the town, and the latter’s son, Judge Nathan Washburn, lawyer and present Justice of the Courts of Plymouth county, is giving a good account of himself. The latter is a descendant in the ninth generation from John Washburn, from whom his lineage is through

Such details of these generations as are ascertainable from the fragmentary vital records of this section follow in the order named.

John Washburn, a native of Evesham, County of Worcester, England, came early to New England, being of record in 1632 at Duxbury, and is named in the assessment of taxes in 1633. He bought land in 1634. His wife Margery, aged forty-nine, with sons John, aged fourteen, and Philip, aged eleven, came in the “Elizabeth” in 1635. Father and sons were included in those able to bear arms, 1643, and the father’s name is among the first freemen of Duxbury. The John Washburn who was the first secretary of the Plymouth Council in England is believed by some to be the elder John Washburn alluded to above. John Washburn of Duxbury and his son John were among the original fifty-four persons who became proprietors of Bridgewater, Massachusetts, in 1645, and they and Philip became resident settlers here in Bridgewater as early as 1665. The father died before 1670. It is not found that Philip left either wife or children.

John Washburn (2), born in 1621, in England, came to New England as stated with his mother in 1635 in the “Elizabeth,” and became an original proprietor of Bridgewater, and a resident there as early as 1665. He married in 1645 Elizabeth, daughter of Experience Mitchell. Mr. Washburn sold in 1670 the house and land that his father gave him at Green Harbor, Duxbury. His will was made in 1686. His children were:

Capt. Amos Washburn, born April 8, 1742, married Prudence Haskins, born Aug. 3, 1743, in Taunton, Mass., daughter of Abiel and Elizabeth (Richmond) Haskins, and grand-daughter of William Haskins. Captain Washburn lived in that part of Middleboro now Lakeville. On the ever memorable Lexington alarm of April 19, 1775, out of the four district companies of the militia of the town a company was formed for service which was commanded by Capt. Nathaniel Wood; of this company Amos Washburn was lieutenant. In September, 1778, on the landing of the British at what became New Bedford and Fairhaven, and destroying property there, among the forces sent to oppose them was a company enlisted from Middleboro by Capt. Amos Washburn. He is of record as one of the captains in the 7th regiment of local militia from 177- to 1781. The children of Captain Washburn were:

Of these James was graduated from Harvard College with the class of 1789, studied law and practiced in Middleboro. He lived in that part of the town now Lakeville. He built a nice home on the site of the present town house. He was the first postmaster of Middleboro, being appointed by President Adams in 1804. He was unmarried, and after holding the office a few years resigned in favor of Maj. Levi Peirce. In 1811 he removed from Middleboro to New Bedford, which he represented in the General Court of the State. His death occurred Nov. 19, 1815.

Luther Washburn lived, on the farm formerly owned and occupied by his father, Capt. Amos Washburn, and where he himself died, and there his son, Cyrus Washburn, also lived.

Bradford Sumner Washburn, born Feb. 22, 1812, was engaged in shoe manufacturing in partnership with William S. Andrews, and this business was carried on for upward of thirty years with steady success. In political sentiment he was a stanch Republican, but he was not a politician. He was a member of the Central Baptist Church. He married Elizabeth S. Harlow, and they had five children, namely: 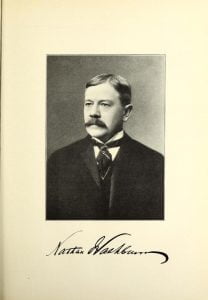 Nathan Washburn, son of Bradford S. and Elizabeth S. (Harlow) Washburn, was born April 18, 1862, in Middleboro, Mass. He acquired his education in the Middleboro public schools, the high school and at Dartmouth College, was graduated from the high school in the year 1881, and from Dartmouth with the class of 1885. Having decided upon the law as his life work he was prepared for the profession and admitted to the bar in 1887. He at once entered upon the practice of the law in his native town and in Boston, maintaining an office in either place. With special fitness and adaptation to the law he early won in its pursuit recognition. As long ago as 1887 he was appointed special justice of the Plymouth Fourth District court, by Governor Ames, a relation he sustained for a decade and more. On the death of Judge Vaughn in February, 1891, he presented a petition from all the towns in the district for appointment to the position of justice of the court, which was the cause of the first disagreement between Governor Russell and the Executive Council. Governor Russell, contending that there should be some Democratic judges in the State, refused to appoint him to that position, he being a Republican, and appointed George D. Alden. The Executive Council rejected Alden’s nomination eight to one (the Council standing eight Republicans and one Democrat). Governor Russell therefore renewed the appointment; and the council again rejected it, by the same vote. Meanwhile Judge Washburn, as special justice, held court under the vacancy for sixteen months, being supported all the time by the Executive Council. The year following Mr. Alden was confirmed by a new council. In 1901 Judge Washburn was appointed by Governor Crane, and has filled the office to the present time. He maintains law offices in both Boston and Middleboro.

Judge Washburn is a member of both the lodge and encampment in the I. O. O. F. He is a trustee of the public library and a member of the Middleboro Men’s Club.

On Nov. 27, 1888, Judge Washburn married Etta Florence Mendall, daughter of Sylvanus and Rebecca Lucas Mendall, and they have one child, Kendrick H., born July 29, 1893, who was educated in the public and high schools of Middleboro, and is now a student at Dartmouth College, class of 1915.

Harlow. In maternal lines Judge Washburn belongs to the Harlow family, his lineage, beginning with the first American ancestor, being as follows:

William Harlow (2), born June 2, 1657, married Lydia, daughter of Elder Thomas Cushman, of Plymouth. He lived in that part of Plymouth called Manomet Ponds, where most of his descendants resided. He and his wife were members of the church at Plymouth. He died Jan. 28, 1711, she Feb. 11, 1718-19. Their children were:

Deacon Thomas Harlow, born March 17, 1686, married Jedidah, daughter of Eleazer Churchill, of Plymouth, and resided at Manomet Ponds. He was deacon of the second church there, and one of the most active church members. He died Nov. 12, 1646. Their children were:

Jonathan Harlow, born March 22, 1718, married Sarah, daughter of Deacon Elisha Holmes, of Plymouth. He lived at Manomet Ponds, and was a farmer there and a member of the church. His children were:

Jonathan Harlow (2), born in 1746, lived in Plymouth and Middleboro. He married Betty, daughter of Deacon John Blackmer, of Plymouth, who died in Middleboro Sept. 9, 1833. Their children were:

Maj. Branch Harlow, son of Jonathan (2), born Sept. 18, 1792, in Halifax, Mass., married Dec. 31, 1815, Lurany, born March 23, 1795, daughter of Martin and Hope (Keith) Keith, and granddaughter of Joseph Keith (3) He served as high sheriff of Plymouth county for several years, and in the State militia held the rank of major, by which title he was familiarly known. His children were: