EDWARD A. GAMMONS of Wareham, well-known citizen and banker, is a native of that section of the State, born in South Wareham Jan. 15, 1842, son of William and Deborah Bryant (Gallt) Gammons.

The Gammons family is supposed to be of English origin, and is found in many parts of New England. The name has been variously spelled – Gammons, Gammon, Gamon, Gamons and Gamans.

One Philip Gammon, a fisherman, of Casco, and later of Portsmouth, N. H., was married prior to 1690, his wife being the eldest daughter of John Parrott; and there was Robert Gammon, of Pemoquid, who took the oath of fidelity in 1674. Seemingly but little has found its way into print concerning the genealogy of the family of Gamon, Gammon or Gammons, and the origin of those of the name who have resided in Wareham has not been ascertained. There are traces of many of the descendants of the Wareham family in some of the towns of Maine after the close of the American Revolution, and at Falmouth, that State, near Portland, Maine, lived families bearing the name along in the middle of the eighteenth century.

Here in southeastern Massachusetts, in several of the towns of the Old Colony, the Gammonses, it is learned through the records, though but fragmentary they be, have been identified with the best interests of their several communities. One William Gammons of Plymouth was at Halifax in 1759, a member of Capt. Josiah Thacher’s compmy of a regiment commanded by Col. John Thomas. In 1736 William Gammons, according to Plymouth records, married Hannah Hubbard.

John Gammons, son of William and Hannah (Hubbard) Gammons, was born in Middleboro April 8, 1745. His wife Hannah died Oct. 13, 1796. at the age of forty-nine years, the mother of seven children, namely:

William Gammons, son of Jairus and Mary Gammons, was born in South Middleboro Dec. 12, 1816. His opportunities for an education were limited. While still young he entered a nail factory in South Wareham, where he learned nailmaking, working there for some time. He later worked in the Parker Mills in Wareham, then operated by Nahum Stetson and others. From there he went to the Tobey Mills at Tremont, where he filled the position of nailer. He was a first-class mechanic and an expert in his line. In 1861 he settled in West Wareham, where he remained the rest of his life. He died after a short illness and was buried in Wareham. He was liberal in church views. In politics he was first a Whig and then a Republican. He married Deborah Bryant Gallt, who was born in Wareham, daughter of Deacon John and Mary (Shurtleff) Gallt, died at her home and was buried in Wareham. To William and Deborah B. Gammons were born: 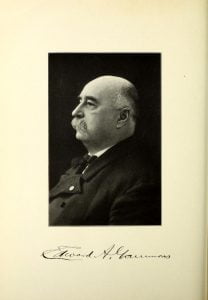 Edward Allen Gammons, son of William and Deborah B. (Gallt) Gammons, was born Jan. 15, 1842, in South Wareham, Mass. His parents soon after his birth removed to East Weymouth, Mass., where they remained about two years, later returning to Wareham, and he was there reared and educated, attending the common schools of the town in the vicinity of Parker Mills, Wareham, the locality in which the family made its home. At the early age of eight years he began alternating his time between work in the Parker Mills in the winters and at sea through the summers. In October, 1862, he enlisted in Company B, 3d Mass. V. I., under Capt. Thomas B. Griffith (who was later major) and Col. Silas B. Richmond, was mustered into service at Camp Joe Hooker, and thence proceeded with his regiment to the State of North Carolina, and for a time was stationed at Newbern. He took an active part in the campaigns with his regiment until the expiration of his term of service, which included the battles of Kinston, Whitehall and Goldsboro. Having been discharged from the service in June, 1863, at Camp Joe Hooker, he returned to his home at Wareham with an honorable war record, and again took up the pursuits of civil life. In 1864 he was offered a commission by Gov. John A. Andrew as captain of an unattached company of militia. In July, 1863, Mr. Gammons was given the position of clerk in the old Wareham Bank and the Wareham Savings Bank (both banks then combined), the former becoming the National Bank of Wareham in 1865. From his position as clerk in these banks, after a dozen years of faithful service, he was advanced to that of assistant cashier, which position he held for ten years, when, in 1885, he became treasurer and cashier of the savings and national bank, succeeding the late Thomas R. Miles, who had been cashier of the bank from its incorporation in 1833. When the law was changed in 1904 separating the national and savings banks Mr. Gammons became cashier of the national bank, his son-in-law, Frank A. Besse, succeeding him as treasurer of the Wareham Savings Bank. Mr. Gammons faithfully performed the duties of cashier of the National Bank of Wareham for a period of nearly thirty years, and for twenty years held the office of treasurer of the Wareham Savings Bank, offices of trust and responsibility which he filled with general satisfaction to the stockholders and depositors, as well as to the general public. He is a director of the National Bank of Wareham, and also a trustee of the Wareham Savings Bank, and is a member of the investment board of the latter. On July 1, 1911, Mr. Gammons was elected president of the National Bank of Wareham.

In politics Mr. Gammons is a Democrat, and has taken an active interest in his native town. He is a member of the water commission, of the electric light commission, and is chairman of the town Democratic committee. Fraternally he belongs to Gen. William T. Sherman Post, No. 208, G. A. R., of Wareham, of which he is a charter member, and of which he has served as quartermaster since its organization, and to Social Harmony Lodge, A. F. & A. M., of Wareham, of which he is past master, and which for twenty-five years he served as secretary. He is also a member of Wareham Chapter, R. A. M.

On Jan. 15, 1867, Mr. Gammons married Mary Bowman Billings, daughter of Warren and Mary F. (Caswell) Billings. Mrs. Gammons is a woman of culture and is prominent in the social life of Wareham. She is a member of the Church of the Good Shepherd (Episcopal), of which church society Mr. Gammons was treasurer for a number of years. To Mr. and Mrs. Gammons have been born three children: