Nye (New Bedford family). The family of this name in New Bedford, the head of which was the Hon. Willard Nye (deceased), one of the successful business men and substantial citizens of the city, prominent in public affairs, at one time mayor, is a branch of the ancient Nye family of Sandwich, Mass., where members in the line of the deceased just alluded to were long prominent. A sketch of Mr. Nye, with his Nye lineage, traced back to the immigrant settler, follows.

Benjamin Nye, born May 4, 1620, at Bidlenden, Kent, England, came to this country and to Lynn, Mass., in the ship “Abigail,” with Edmund Freeman’s company, 1635. Mr. Nye’s lineage is traced back to Randolf Nye, who settled in Sussex, England, in 1527, through William Ralph, Thomas and Thomas (2). Benjamin Nye was married Oct. 19, 1640, in Sandwich, Mass., to Katherine, daughter of Thomas Tupper, who, too, was a passenger in the “Abigail,” and who in 1637 settled in Sandwich. In 1654 Benjamin Nye’s name appears on a list of those contributing toward building a mill; in 1655 his name is on the subscription list for building a meetinghouse; in that same year (1655) he was supervisor of highways; in 1657 he engaged to pay fifteen shillings yearly toward the minister’s salary; was chosen constable in 1661, etc. He seems to have built a mill at the little pond and therefore the town in 1669 voted him twelve acres of land. He was granted permission in 1675 to build a fulling-mill on Spring River. These with other references to him in important connection and relation to public business evidence the kind of man he was. The children of Benjamin and Katherine were:

John Nye, son of Benjamin, took the oath of fidelity in 1678 and served on the grand jury that same year. He and his brother Ebenezer bought 100 acres of land in Falmouth, and in 1689 they were granted 200 acres more. He was one of a committee in 1694 appointed to erect two cottages on the plain convenient for the shepherds to dwell in. He and William Bassett were appointed a committee Sept. 19, 1695, to provide a suitable person to keep school, the remuneration to be ten pounds. He married Esther Shedd. He died in 1722, and both left wills. Their children were:

Stephen Nye, son of Nathan, born June 6, 1720, in Sandwich, Mass., married June 7, 1744, Maria Bourne, who died Aug. 19, 1814, aged eighty-four years. Mr. Nye was very prominent in the public affairs of Sandwich; was for eighteen years deputy to the General Court; was a member of the Committee of Safety and was a delegate to the first and third Provincial Congresses of Massachusetts. He died July 6, 1810. His children were:

Nathan Nye, of Sandwich, son of Stephen, lived and died in his native town, of which he became one of the prominent citizens, serving many years as assessor, tax collector, town clerk, town treasurer, justice of the peace, and for twenty-two years as a member of the board of selectmen. He was a patriot of the Revolution; was on the list of officers of the Massachusetts militia; was adjutant of Col. Nathan Freeman’s regiment, commissioned June 5, 1778, and served on sundry alarms at Bedford and Falmouth, twenty-two days; on the alarm of May 20, 1778, two days; on alarm of Sept. 16, 1778, twelve days; on alarm of April 1, 1779, five days; alarm of May 16, 1779, three days; his name is also on the payroll of staff officers, engaged Sept. 6, 1779; was discharged Sept. 16, 1779, eleven days’ service, on an alarm at Falmouth. 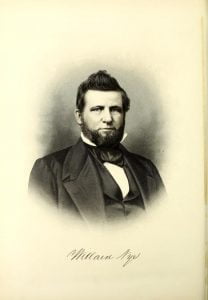 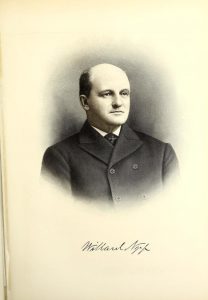 Willard Nye, son of Obed Butler, was born June 25, 1811, in Sandwich. On June 3, 1833, he married Eliza A. Barker, who was born in 1812, daughter of Abraham and Eliza W. (White) Barker, and they resided in New Bedford, Mass. Mr. Nye came to New Bedford at the age of fifteen years. He here served an apprenticeship in the store and counting room of David E. Greene, and in time was admitted to a partnership in the business with his employer, they doing business under the firm style of David E. Greene & Co., which included Dennis Wood, another well known citizen of New Bedford. Suffice it to say that during the most prosperous days of the whaling industry in New Bedford this firm carried on one of the most successful establishments in the city.

As a merchant Mr. Nye had the reputation of giving close attention to his business and of possessing high integrity. Ardent and enthusiastic, he was greatly interested in the political struggles of his time, ever ready and active in cooperation with those of his party to advance what to him seemed to be right. He was active in espousing the cause of the North when the great issue between the two sections arose. Beneath what to a stranger might seem a rugged and cold exterior beat a kind and feeling heart; his was a soul of tender and noble impulses. He was ever a friend to the poor and distressed. It is related of him that he once at the imminent risk of his life saved that of a drowning boy. His filial piety, too, was a marked characteristic of the man. He represented his town in the General Court of Massachusetts in 1847 and 1854, and was mayor of the city in 1859. In these offices of trust he faithfully and conscientiously performed his duties.

Willard Nye, Jr., son of Willard and Eliza A. (Barker) Nye, was born Feb. 21, 1851, in New Bedford, Mass. He early became a student of nature, and in time a naturalist of recognized ability. Especially was Mr. Nye a well known authority on the varieties and habits of salt water fish, and he frequently accompanied the United States steamer “Fishhawk,” as one of the expert naturalists. His ability was recognized by the authorities, and. although never connected with the government service his opinion was often sought.

The old Nye homestead stood on Acushnet avenue and from the stone walls surrounding it Mr. Nye built of rough field stone what is perhaps easily the most peculiar house in New Bedford, and styled it “The Fort.” Here Mr. Nye spent his time when at home amid his valuable collection of historical and scientific curiosities and relics. He never married, and this house he built according to a bachelor’s ideas of domestic life.

Mr. Nye was for many years a member of the New Bedford Protecting Society, joining it in 1884, and was long active in its life. He was also a member of the W Tamsutta Club and of the Sons of the American Revolution. He died March 9, 1908, in the fifty-ninth year of his age. His sister, Mrs. George H. Freeman, alone survived him. 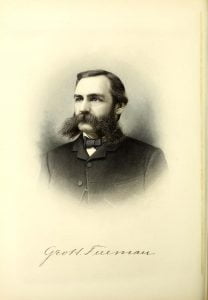 George H. Freeman was born Dec. 28, 1838, in Sandwich, Mass., son of David and Jane (Newcomb) Freeman. For many years he resided in New Bedford, where he was a clerk in the city government department. He died in New Bedford March 15, 1908, and was buried in Oak Grove cemetery. He was a member of the Unitarian Church. On Oct. 2, 1865, he married Clara S. Nye, and to this union were born two children: