COPELAND (Whitman family). The family bearing this name is one of long and honorable standing in southeastern Massachusetts. Early at Braintree, then at Bridgewater, and for generations in the town of Easton, this Easton-Whitman branch of the earlier Braintree stock has for several generations been one of Easton’s leading families, and more recently – a later generation – in the new town of Whitman, formerly South Abington. Reference is made to the forefathers of the present George Copeland and Horatio Franklin Copeland, M. D., brothers. The latter though of Easton birth has been for nearly half a century active and prominent in the professional and social life of what is now Whitman. Himself a veteran of the Civil war, the Doctor is a representative of patriotic ancestry, his father being a soldier of the war of 1812 and his great-grandfather of the Revolution, and he, too, is representative of the Pilgrim Fathers, descending in direct line from John Alden and Priscilla Mullins, of the “Mayflower.” 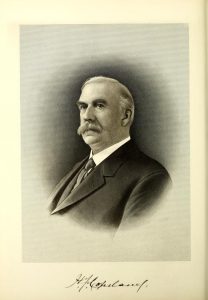 Lawrence Copeland is of record at Braintree as early as 1651, Dec. 12th of which year he married Lydia Townsend. His death occurred Dec. 30, 1699, when, according to the gravestone, he was aged an hundred years. His widow Lydia died Jan. 8, 1688. Their children were:

Elijah Copeland, born in 1739, married in 1765 Ehoda, born in 1743, daughter of Josiah Snell (2), granddaughter of Josiah Snell and great-granddaughter of Thomas Snell, who came from England, as stated above. Mr. Copeland located in Easton, Mass., and lived to be seventy-eight years of age. He saw quite a little service in the Revolution. It seems that two English and two Hessian brigades, under command of General Clinton, had come from New York early in December, 1776, and took possession of Newport, R.I. Rhode Island could offer no resistance, and therefore the militia was summoned from the other New England Colonies in order to prevent an invasion of the country, should that be attempted. It was said that the enemy intended to march to Boston by way of Providence. From that time, for three years, there were continual alarms, and a good deal of what is called “Rhode Island service” for the militia of the vicinity. The British were closely watched all the time, and there were occasional skirmishes of an unimportant character. In one of the two companies that went from Easton which served until the end of the month, and the one commanded by Captain Keith, in Colonel Daggett’s regiment, Elijah Copeland served as drummer. He was again in the service for three months, beginning Dec. 30, 1777, at Providence. He was again out in 1780, and in 1781. In March of the last named year General Washington came to Rhode Island to arrange with Rochambeau for an active campaign. On the 14th a grand reception was given him at Providence, at which’ a company commanded by Captain Keith, from Easton, then in Rhode Island, was probably present. Elijah Copeland was a member of this company at the time. Mr. Copeland had a son Elijah, born in 1766, who might have performed toward the close of the war a part of the service attributed to his father. Elijah Copeland and his wife Rhoda lie buried in what is known as the Elijah Copeland graveyard located south of the old Copeland place on the Bay road, just opposite the end of Beaver street, and some distance from the road, in the town of Easton, Mass. Mr. Copeland died Sept. 8, 1817, aged seventy-eight years. His wife Rhoda died Oct. 5, 1825, aged eighty-two years. The children of Elijah and Rhoda (Snell) Copeland were:

Josiah Copeland, born in 1768, married Susanna Hayward, or Howard, who lived to the advanced age of eighty-five years, dying in Easton, Mass., May 5,. 1859. Mr. Copeland lived in Easton and for a time in Bridgewater, Mass. He was quite an active, enterprising man. From toward the close of the eighteenth century for years into the nineteenth he, part of the time alone and part with others, was engaged in various manufacturing enterprises in South Easton, among them, the operation of a sawmill, oil mill, card wool machine, the manufacture of cotton yarn, the carrying on of a forge, etc. Mr. Copeland was one of the prominent men of the town. He served for five years ó from 1811 to 1816 – as selectman. He died Dec. 14, 1852, at the age of eighty-four years. His children were:

Horatio Copeland, son of Josiah and Susanna (Hayward or Howard) Copeland, was born March 5, 1796. He followed in the foot-steps of his father and was a very active and enterprising man. He was variously engaged in manufacturing, both in Massachusetts and in the South. During the war of 1812-15 he was in the service, being a member of Capt. Isaac Lothrop’s company of light infantry, in the regiment commanded by Lieutenant Colonel Towne. This company was called out and did duty about Boston, in September and October, 1814. He was selectman for four years, from 1839 to 1843. The post office was established at South Easton village in 1849, and in March, 1854, Mr. Copeland was appointed post-master, being the third in that office and serving seven years, when in 1861 he was succeeded by his son, George Copeland, who held the office for a period of almost fifty years. He married, May 16, 1834, Delia Maria Nye, born April 14, 1804, daughter of Samuel and Polly Nye, and widow of Thomas Howard. She died at the home in Easton Jan. 26, 1878, and was buried there. Mr. Copeland died Dec. 2, 1865, and was also buried in Easton. Their children were:

George Copeland, now living retired, was born in Easton Jan. 5, 1837. He was educated in the local common schools and at Peirce Academy, Middleboro, Mass. In 1859 he embarked in the grocery business at South Easton, in which he was successfully engaged until 1882, when he sold out. Meantime, in October, 1861, he was appointed postmaster of South Easton, and he held the office continuously until July, 1910, a period of fifty years lacking but two months. He has taken considerable interest in public affairs and has given efficient service in the various responsibilities to which he has been called, having served as representative to the General Assembly in 1873, and for over twenty years – from 1882 to 1905 – as member of the board of selectmen of Easton. Politically he has always been a stanch Republican. He is ‘a member of Paul Revere Lodge, A. F. & A. M., of Brockton.

On June 30, 1868, Mr. Copeland married Harriet A. Kimball, daughter of John and Lusanna (Williams) Kimball, of Easton, and they have three children, namely:

Horatio Franklin Copeland, M.D., son of Horatio Copeland and Delia Maria (Nye), was born Nov. 15, 1842, in Easton, Mass. After acquiring his elementary education in the district schools of his native town, he was was fitted for college at Thetford (Vt.) Academy, but instead of then entering college decided upon medicine as his chosen profession, and after studying with that justly celebrated physician, Dr. Caleb Swan, of Easton, he attended Harvard Medical School, from which he was graduated in 1865, with the degree of M. D. His country needing his services during the memorable Civil war, Dr. Copeland received his degree in advance of the regular graduation, and at once (January, 1865) took the position of acting assistant surgeon in the United States service, and was placed in charge of the post hospital at Bermuda Hundred, and also of the large smallpox hospital located at that point. Acquiring valuable experience, and doing faithful service, he remained in the service until June of that same year or until the close of the war, when he returned to his native State, and located in the private practice of his chosen profession at Abington, now Whitman, where he has since been constantly and successfully engaged and where he has acquired a large and lucrative practice.

Dr. Copeland is untiring in his efforts to familiarize himself with new discoveries in the medical profession, and is endowed to an unusual degree with the qualities which constitute a good physician and surgeon.

In political sentiment Dr. Copeland is in accord with the principles of the Republican party. In religious views he is liberal and attends the Congregational Church. Dr. Copeland is a member of the Massachusetts Medical Society and the American Medical Association, having served in the latter as a member of the auxiliary legislative committee. He has long-been an active and prominent member of the Masonic organization. He was admitted to the order in Rising Star Lodge, of Stoughton, later transferring his membership to Puritan Lodge, of South Abington. He is also a member of Pilgrim Chapter, E. A. M., of Abington; Abington Council, R. & S. M., of which he was one of the constituent members, and of which he was the presiding officer for four years; and Old Colony Commandery, of Abington, of which he is past eminent commander. Dr. Copeland is also a valued member of the Grand Army of the Republic, holding membership in David A. Russell Post, No. 78, of Whitman.

Dr. Copeland is in accord with the progressive elements of society, his social qualities, his simple and democratic habits, together with his cordial and hospitable manner, attracting many friends, whom he retains by his omnipresent frankness and sincerity, his broad and charitable opinions, and the strength of his adherence to his principles. He is a broad-minded practitioner, and has met with a degree of success that has placed him among the foremost members of his profession in Plymouth county, enjoying the esteem and confidence of his medical brethren. Although devoted to his profession, his sphere of usefulness and success has by no means been confined to that calling alone. He has served several years as a director of the Whitman National Bank, and as a trustee of the Whitman Savings Bank. Dr. Copeland is fond of outdoor sports, and enjoys a jaunt with the gun and rod. He has always been animated with a high appreciation of the duties of good citizenship, and commands the respect of the community in which he has long been a valued and honored resident. Dr. Copeland is unmarried.