The United States censuses prior to 1850 did not include Indians, and they were not stated in the total of population. The Indian census of 1850 grew out of an enumeration of the Indians under authority of the following clause in the Indian appropriation act of June 27, 1846:

And it shall be the duty of the different agents and subagents to take a census and to obtain such other statistical information of the several tribes of Indians among whom they respectively reside as may bo required by the Secretary of War, and in melt form as he shall prescribe.

In the Seventh Census of the United States, 1850, page XCIV, appears as table of Indian population, which includes a statement by the Commissioner of Indian Affairs, dated November 10, 1853, of the number of’ Indians in the United States at that time, The aggregate, wording to this statement, was 400,764, but this does not profess to be accurate, for the number of Indians in the states of South Carolina, California, and Texas, the territories of Oregon, Washington, Utah, and New Mexico, and those belonging to the Blackfeet, Sioux, Kiowa, Comanche, Pawnee, “and other tribes”, numbering, according to the table, 279,130, are confessedly “estimates”. Thus, while Schoolcraft, in the statement dated July 1850, reports the California Indians at 32,231, this statement, 3 years later, “estimates” their number at 100,000.

Indians In The United States In 1853

The following statement was made up on November 10, 1853, at the request of the Superintendent of the Seventh Census, 1850, by the Commissioner of Indian Affairs, It is valuable as showing the location of the Indian trines which form a portion of the inhabitants of the territory of the. United States, though they are not included in any of the enumerations of 1850 except in a few cases, which can not affect, the general correctness of the table. The total number of Indians for 1789 is 76,000; for 1825, 129,3116; for 1853, 400,764. The exceedingly large estimate of 100,000 Indians for California swells the number above other estimates.

Indians in the United States in 1853, With The Number, in 1789 and 1825, Showing their Location 1The great difference in the several aggregates must he accounted for in the extension of the territorial limits of the United States by the acquisition of Texas, etc, bringing with it an increased Indian population; and, further, in the fact that the report of Mr. McKenney for 1825 doss not appear to have embraced the tribes of the Missouri valley, the plains, Oregon, etc., then a part of the United States.

The civilized Indians and the un-enumerated Indians, as given in the two tables for 1860, aggregate 339 491.

The following summary of other than civilized. Indians is taken from page 605 of the volume just cited:

Indians In The States and Territories Retaining Their Tribal Character Not Enumerated In The Eighth Census, 1860 3Tenth census of the United States, volume I page 545

The following table, prepared by Hon. N. G. Taylor, Commissioner of Indian Affairs, in 1867 (see Senate Executive Document No. 4, special session, 1867), shows the Indian tribes in the United States at that time and, their location, Mr. Taylor gave two tables, Tables A and B. Table B, which shows the location of tribes by superintendencies and population, is not republished, but the total Indian population, exclusive of citizen Indians, is given as 306,925 for 230 tribes, though by an apparent clerical error printed as 306,475.

Indian Tribes in the United States in 1867

[Where no statement of population is made apposite the name of the tribe it is because the tribe is aggregated with others under the head of the proper superintendency and agency.]

An attempt to include an enumeration of the Indian population in the ‘United States” census was made at the Ninth Census. On page XVII of the volume on Population and. Social Statistics is given a detailed Statement of the result by states and territories, Alaska included, In brief it is as follows:

The report of the Commissioner of Indian Affairs for 1870 gives the total number of Indians, excluding the Indians of Alaska, at 287,040. Adding to this 25,731 Indians “out of tribal relations”, reported in the census, we have 313,371; a substantial agreement with the returns and estimates of the United States census. On page XVII of the volume on Population and Social Statistics, Superintendent Walker counted: the Indians in the census of 1870 as it part of the true population of the United States, as follows:

Indians in the United States in 1870

The Indians reported by the Indian Office were distributed among 68 agencies in states and territories as follows: 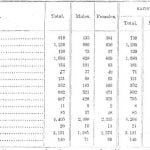 Sex On the Civilized Indian Population, With General Nativity 1880 2

The census of Indians living within the jurisdiction of the United States, Alaska excluded, in 1890 was taken under the provision of the census act of March 1, 1889, as follows:

The superintendent of the census may employ special agents or other means to make an enumeration of all Indians within the jurisdiction of the United States, with such information as to their condition as may be obtainable, classifying them as to Indiums taxed and Indians not taxed.

Some tribes were not completely enrolled until 1891, but in most cases the data were secured as early as September 1890.

The number of Indians on reservations engaged in agriculture for a livelihood is less than that of those who obtain a living through root digging, hunting, fishing, or horse trading. The larger portion of the Indians remaining on reservations is not agricultural. The Navajos are entirely self-sustaining as sheep and horse raisers.

The Indians of the United States in 1890 are either upon reservations or locations owned by themselves, or have abandoned their tribal relations and become citizens. No Indian bands as such are now roamers except Dull Knife’s band of Gros Ventres in North Dakota, numbering 168, and this band is, in fact, attached to Fort; Berthold agency. Some Papagos and Navajos also roam, but return to their reservations from time to time. When any Indians are found roaming they are off reservations with permission.

The Indian census in detail is as follows:

The statistics of Indians show the number of Indians taxed or taxable and not taxed, number to whom rations are issued, etc., as follows:

The following table shows the number of Indians taxed or taxable, self-sustaining, and counted in the general census as 58, 806, and gives them as males and females by states and territories:

Indians counted in the General Census, By Sex and by States and Territories

The following table shows the number of Indians not taxed and not counted in the general census, 189,447, and gives them as males and females by states and territories: