St. Tammany parish, Louisiana, borders on the northern shore of Lake Pontchartrain and is bounded on the east by the State of Mississippi, from which it is separated by Pearl River.

In the southern part of the parish are many bayous that flow into Lake Pontchartrain. Extensive marshes and swamps are found between the bayous, in which flourish the magnolia, live oak, black gum, cypress, and palmetto, and vast quantities of Spanish moss hang from the branches of many trees. Back from the swamps and bayous, on slightly higher ground, is one unbroken stretch of forests of longleaf pine (pl. 1).

Deer, otter, and mink are still to be found; opossums, raccoons, squirrels, and rabbits are very numerous; and ducks, quail, and wild turkeys are killed in large numbers.

The climate is mild during the winter; there is but little frost, and rarely a few flakes of snow fall. The summers are long and hot. As a whole the section is very healthful.

At the present time the Choctaw have two settlements within the limits of the parish: one near Bayou Lacomb, the other at Pearl River station, on the right bank of the river, about twelve miles from its mouth. Only a few members, a mere remnant, of the tribe now live in this region. 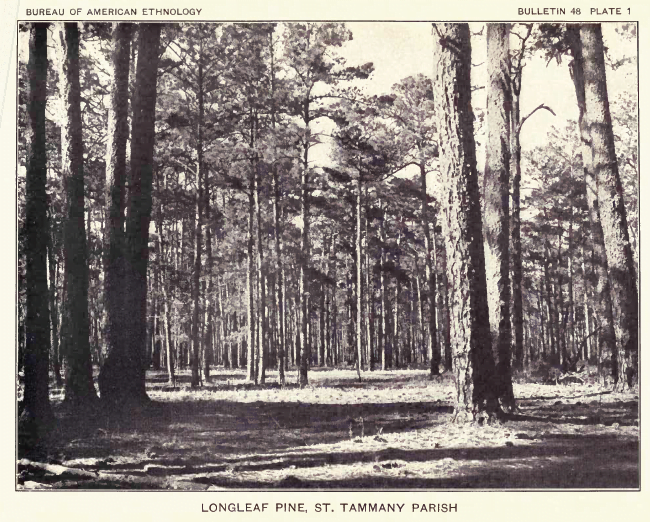