The family bearing the name of Hewett is one of long and honorable standing in this country, the progenitor of which was among the early settlers of New England, and his descendants to the present time have given a good account of themselves. Reference is here made to the branch of this family to which belonged the late Joseph Hewett, who for a period of thirty years was an honored resident of Brockton, and his posterity, numbered among whom have been men prominently identified with the business interests of the city for many years.

Thomas Huet, born in 1609, was an early inhabitant of Hingham and a landholder. Probably Huet’s Cove in that vicinity took its name from him. He married (first) Elizabeth, daughter of William Chapman, who died in 1639, leaving most of his property to his daughter just named. She died May 22, 1649,” in Hingham. He married (second) Mrs. Mary Cutler, widow of John Cutler. Mr. Huet was a tailor and resided in West Hingham. He was made a freeman May 26, 1647. He died May 24, 1670, in Hingham, aged about sixty-one. His wife outlived him and removed to Charlestown. His children, all born to the first marriage, were:

John Hewett, baptized July 18, 1641, removed to Marshfield and there married in 1668 Martha, daughter of Christopher Winter, and after the death of the latter in 1683 Mr. Hewett moved to his island home. His father-in-law, Christopher Winter, succeeded Mr. John Bradford in the occupancy of Governor’s island after 1660. This island bore the name of Hewet’s island after the decease of Winter. That resort of the sportsmen and fear of the mariner, “the Brant Rock,” lies extending into the sea, between this and Branch island. The children of John Hewett and wife Martha were:

Joseph Hewett, only son of Joseph and Abigail (Harlow) Hewett, was born Aug. 6, 1804, in Duxbury, Mass., and died May 13, 1894, in the ninetieth year of his age, in Brockton, where for a period of thirty years he had been a valued citizen, and where he will long be remembered for his nobility of character and his hearty interest in educational and religious work. When his parents removed to Marshfield Joseph Hewett was a mere child. After attending the district schools of the latter town for the customary period he took up the study of languages under the tutorage of Rev. Martin Paris, with whom he learned how to translate Latin and gained a slight knowledge of other languages, a knowledge which he later improved by reading and studying. He was a farseeing and deep-thinking man, and until his last days had kept himself well versed upon the general topics of the day. When about twenty years of age he commenced teaching in the school in his district, having some of his former schoolmates among his pupils. He followed this occupation until 1844, a period of about twenty years, teaching in both Marshfield and Duxbury, and received the highest salary paid for teaching in those days. After he gave up teaching Mr. Hewett devoted his time exclusively to the duties of the various political and religious positions he held, as well as to the management of his large farm. On this property, which contained about one hundred acres of land, he raised considerable stock, giving employment to a number of hands. In his early life he also conducted a general store, and was engaged in the making of boots in Duxbury. Mr. Hewett was in early life a member of the Liberal party, afterward allying himself with the Whigs, and finally becoming a Republican, and was a leader in the political affairs of that section of the county, counting among his intimate friends and coworkers Daniel Webster, who frequently visited his home. He was not of those who sought office, but owing to the high esteem in which he was held by the community was often importuned to accept office, and served several years as a member of the board of selectmen, assessors and overseers of the poor. He was particularly interested in educational matters, and was a member of the school committee of Marshfield for a great many years. In 1864, on account of failing health, Mr. Hewett came to North Bridgewater, now Brockton, where he purchased a place of about sixteen acres, but did not again engage in active business, living his remaining days, which covered a period of thirty years, in retirement. He had been for a number of years a member of the Congregational Church in Marshfield, which he served a number of years as deacon, and upon coming to Brockton he identified himself with the First Congregational Church, of which he later became deacon, serving in that capacity until his death. Though of a modest and retiring disposition, his counsel was frequently sought in legal and other matters, and during his residence in Marshfield he was frequently called upon to draw up wills and settle estates. Mr. Hewett was of a very benevolent nature, and his assistance was bestowed with so little ostentation that few besides those whom he aided ever knew of his numerous kindly acts and deeds.

On Dec. 25, 1830, Mr. Hewett was married to Sarah Thomas Baker, who was born Nov. 28, 1809, daughter of Samuel and Eunice (Perry) Baker, of Marshfield. Mrs. Hewett was a member of the First Congregational Church of Brockton, and like her husband was a devout Christian. She died Jan. 2, 1886, the mother of the following children: 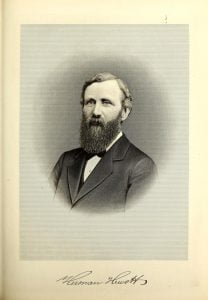 Herman Hewett, son of the late Joseph and Sarah Thomas (Baker) Hewett, was born Oct. 27, 1833, in Marshfield, Mass., and in the district schools of his native town acquired his early educational training. When eighteen years of age he went to Rockland, Mass., where he became apprenticed to the jeweler’s and watchmaker’s trade with Walter B. Gurney, with whom he remained for about three years. He then went to North Bridgewater, where he worked at his trade for David Studley for several years, when he went to Taunton, Mass., and there engaged in the jewelry business on his own account. He remained but a short time, removing thence to Bridgewater, where he opened a jewelry store, and continued in business in the latter town until in September, 1863, when he sold out the business to his brother, Edward A. Hewett. He then returned to North Bridgewater, now Brockton, and established himself in the jewelry business, opening a store in the Tyler Cobb building, at the corner of Main and High streets, continuing at that location for a few years, when he removed to the Henry L. Bryant building, known as the old Opera House block, where he carried on business for some years. Finally he leased a piece of land at the corner of Main and West Elm streets, of Henry Cross, and there erected a building to which he removed his business, and where he continued successfully engaged until his death. He was the first in the town to have a street clock, which was lighted by an oil lamp, and was considered the standard timepiece of the town for many years. Mr. Hewett was a prudent, energetic man, and always faithful to his business and his interests. He was fond of a horse and carriage, and for several years before his death, being in poor health, he spent much time in driving. Domestic, and fond of his home and family, he devoted much time to looking after their welfare. In political views he was a firm believer in the principles of the Republican party, but never cared for public honors, preferring to give his time to his business. Mr. Hewett passed away Jan. 14, 1885, in the fifty-second year of his age, at the Massachusetts General hospital in Boston.

Mr. Hewett was twice married, his first wife being Sarah B. Severence, of East Bridgewater, Mass., who died in North Bridgewater in March, 1869, the mother of one son, Herman Severence, who married Lillian W. Sears and is engaged in the jewelry business in Brockton. On May 29, 1872, Mr. Hewett married (second) Mary Otis Copeland, daughter of Stephen Otis and Mary (Beals) Copeland, of West Bridgewater, and by this union there was one son, Joseph, who was born July 20, 1873; he is a graduate of the Boston School of Technology and is now a member of the E. E. Taylor Company, shoe manufacturers of Brockton, of which he is secretary and superintendent (he married Alice Thatcher, of Brockton).

Justin Hewett, son of the late Joseph and Sarah Thomas (Baker) Hewett, was born Oct. 2, 1852, in Marshfield, and in the schools of his native town and at North Bridgewater acquired his education. Leaving school at the age of about eighteen years, he went to work in the shoe factory of Peleg S. Leach, and after devoting about fifteen years to working on shoes, during which time he was employed in several of the leading shoe factories of the town of North Bridgewater, he engaged in farming, in connection with which he had been extensively interested in the wood business and also in dairying, at the old homestead on Prospect street. In political faith, like his honored father, he is a stanch Republican.

On Aug. 31, 1882, Mr. Hewett was united in marriage to Susan Eldora Reynolds, daughter of the late Charles T. and Sarah S. (Knowles) Reynolds, of Brockton. Mr. and Mrs. Hewett have no children.