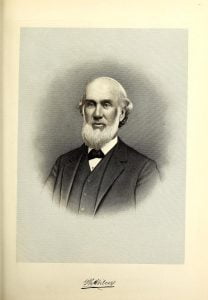 The name Wilcox, variously spelled, dates back to an early period in English history. One “Wilcox or Wilcott” is recorded as furnishing three men at arms at the battle of Agincourt. Another of the name is of record as court physician to King Charles. One bearing the name in more recent years, in the eighteenth century, was bishop of the Church of England and dean of Westminster Abbey. The family is one of honor and renown in old England, several branches of it being known to heraldry. Here in America, the name is found in the beginnings of our Colonial history. The Wilcoxes were at Jamestown, Va., as early as 1610, and at Cambridge, Mass., as early as 1636.

This article, however, is to deal, and but briefly, with one branch only of the New England family – with some of the descendants of Daniel Wilcox, who had a grant of fifteen acres of land at Portsmouth, R. I., Dec. 10, 1656, and who later, in 1664, bought a house in Dartmouth, and was constable there in the year following. Mr. Wilcox later became a resident of the town of Tiverton, being an inhabitant there on the organization of the town, March 2, 1692.

There was an Edward Wilcox, whose name appeared on the list of inhabitants “having submitted themselves to the government that is or shall be established,” admitted to the island of Aquidneck in 1638. Mr. Wilcox was later a resident of Kings Town, R. I. This Edward Wilcox was, according to the Rhode Island genealogist Austin, the father of Daniel Wilcox (above). The latter married Nov. 28, 1661, Elizabeth, daughter of John and Sarah (Warren) Cook (the former a “Mayflower” passenger), and they died, Mr. Wilcox July 2, 1702, and Mrs. Wilcox Dec. 6. 1715. Their children were:

From the foregoing source sprang the present venerable Thomas Wilcox of New Bedford, whose long, active, busy and successful career is inseparably connected with the growth and development of that notable whaling city, and he himself was a whaler there of the long ago.

From Daniel Wilcox, of Portsmouth, Dartmouth and Tiverton, the descent of Thomas Wilcox of New Bedford is through Edward, Josiah, William, Thomas and Capt. Joseph Wilcox. These generations in detail and in the order named follow:

Edward Wilcox married Sarah Manchester, daughter of William and Mary (Cook) Manchester, and they were residents of Tiverton, R. I., where Mr. Wilcox died in the year 1718. Their children were:

Josiah Wilcox, son of Edward, born Sept. 22, 1701, married Patience, and their children of Tiverton town record, according to Arnold, were:

Thomas Wilcox, son of William, born Aug. 28, 1757, married Keziah Bennett. Mr. Wilcox was a soldier and patriot of the Revolution. He was, perhaps, the Thomas Wilcox who was a member of Captain Carr’s company, Colonel Lippitt’s regiment, in the fall of 1776, and in that same year served in Colonel Elliott’s regiment. One Thomas of Tiverton was stationed at different times during the war near Howland’s Ferry, in Tiverton. He, too, took part in the expedition of 1777, to capture General Prescott, and at his death, May 26, 1843, it Was thought that he was the last of that adventurous band of forty who under Colonel Barton captured the British officer named and conveyed him safely to Warwick, R. I. This event occurred July 9th of that year named. To Mr. and Mrs. Wilcox were born eleven children:

Capt. Joseph Wilcox, son of Thomas, born Dec. 18, 1782, married (first) Rebecca, daughter of Henry Perkins, who rendered his country faithful service during the Revolution, from Boston, though he subsequently removed to Dartmouth, Mass., and he married (second) Elizabeth Perkins, a sister of his first wife. His children were:

Mrs. Elizabeth Wilcox lived to within five months of her one hundredth birthday, dying Nov. 3, 1881.

Captain Wilcox removed to New Bedford soon after 1800, and there resided the remainder of his life, dying Oct. 13, 1868. He had been a whaling master, and built in 1834 the house still (1911) occupied by his son, Thomas Wilcox, in Middle street, New Bedford.

Thomas Wilcox, son , of Capt. Joseph, was born July 10, 1822, in New Bedford, Mass., and in the public and private schools of the town acquired his early book training, furthering his studies at the Friends’ Academy, in the same town. After his school days were over he became a clerk in a whaling and ship chandlery store of J. B. Wood & Co., at New Bedford. In 1844 he engaged in the whaling business, an occupation that claimed his time, and in which he prospered, until 1860. Since then through the active business period of his life Mr. Wilcox has been occupied in various business enterprises.

On Dec. 12, 1866, Mr. Wilcox was married to Emily K., daughter of Daniel and Elizabeth (Seabury) Wilcox (she a daughter of Constant and Susannah Seabury), of Tiverton, R. I. They have no children.