NATHANIEL NEWCOMB, of Norton, Mass., was connected with the cotton manufacturing business from 1814 until 1861, and during this long period of activity won a competency not by lucky speculation but through the safer and saner methods of careful consideration, industry and frugality, maintaining throughout the highest personal and commercial integrity. 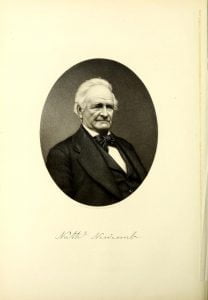 Mr. Newcomb was born April 12, 1797, of the sixth generation in descent from Francis Newcomb, who was born probably in Hertfordshire, England, about 1605, and came to America in the ship “Planter” in 1635, accompanied by his wife Rachel, then aged twenty, his daughter Rachel (aged two and a half years) and son John (aged nine months). After residing in Boston three years Francis Newcomb moved his little family to Braintree (now Quincy, Norfolk Co., Mass.), where he died May 27, 1692, his gravestone says “aged one hundred years.” Tradition says he came from Oxfordshire, England, and was of pure Saxon blood. He owned several tracts of land in Braintree. He had ten children.

Peter Newcomb, son of Francis and Rachel, was born in Braintree. He was a “husbandman” and much in public office. His estate was inventoried at £740, Is. He married Susannah, daughter of Richard and Sarah Cutting, of Watertown and they had nine children.

Jonathan Newcomb, son of Peter and Susannah, was born in Braintree in 1685-86. He was a “yeoman” and owned several pieces of land. On Jan. 22, 1727, he bought fifty-two acres in Norton for £360, and removed thither in March, 1728. The same year he bought thirty-five acres more for £245, and in 1742 seventy acres for £200. He served in the memorable expedition against Louisburg, on Cape Breton, and died while in service, before November, 1745. By his wife Deborah (who died in 1780, aged ninety-five years) he had eight children.

Joseph Newcomb, son of Jonathan, was born in Braintree, but removed to Norton with his parents when twelve years old. He served in the old French war, first in 1749 in Z. Leonard’s company, Raynham. In 1757 he was in S. Witherell’s company of Norton. His will disposed of about 650 acres of land, and his personal estate inventoried at £1,286, 6s, 8d. He married (intentions published) Oct. 3, 1745, Judith Pratt, daughter of Josiah, and their children were:

Josiah Newcomb, son of Joseph, born April 14, 1764, was a farmer and resided during his lifetime in Norton. He was a soldier in the Continental army in the Revolution, enlisting July 27, 1780, in Capt. John Allen’s company of Col. Carpenter’s regiment. Josiah Newcomb married (intentions published) Oct. 17, 1782, Rebecca Godfrey, of Easton, daughter of Joseph and Rebecca (Tisdale) Godfrey. She was born in Easton Sept. 27, 1765, and died Sept. 25, 1831. In 1834 he married (second) Charlotte Forrest. His children, all by the first marriage, were:

Nathaniel Newcomb was given the advantages of the common schools, and at the age of seventeen entered the employ of his brother-in-law, Simeon Presbrey, in a cotton mill in Stoughton, and was thus started in the line of work that was to engross his attention for nearly all the remainder of his life. Under Mr. Presbrey he learned the rudiments of the business, and when he began for himself in his native town his understanding of the work was so clear that success at once attended his efforts as a manufacturer of cotton thread. The thread mill was burned Dec. 31, 1831, and. he then began the manufacture of wadding, buying of James Beaumont the patent right to make wadding, and continuing in the wadding and batting business till, having accumulated, a handsome fortune by his untiring industry and rigid economy, he gave up active connection with the work in 1861. He was known as a man of caution, one who took no risk, and he was often sought for advice. During his life he used his money to develop the business in which he had made it, but he often expressed a desire that at his death he might leave some token of remembrance to the town with which he had so long been identified. This wish his daughter carried out, in 1882 presenting to the town a memorial of her father in the shape of the present town hall.

Mr. Newcomb was a Democrat in politics, but he had no desire for official position. He was of a strong and positive nature, and carefully considered a subject before expressing his opinion. His life was one of study and of active devotion to business, and his success was the natural outcome of his ability and courage. He was genial and social, and won and retained the respect of men in every walk of life.

On April 17, 1873, Mr. and Mrs. Newcomb celebrated the fiftieth anniversary of their marriage, entertaining a large number of friends from various places.