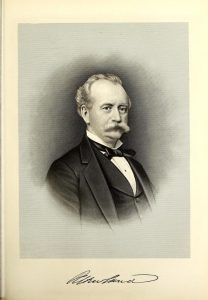 HOWLAND. Arthur and Henry Howland are believed to have come to America together and probably before 1625; they appeared in Plymouth Colony in the early days of its settlement. They were members of the Society of Friends and most of their descendants for many generations were, and many at the present time are, Friends. Arthur lived for a few years in Plymouth, then became a landholder and resident of Marshfield; while Henry, the progenitor of the Ancient Dartmouth Howland family, the branch here specially considered, lived at Duxbury. The first mention of him in New England is that made in the allotment of cattle to the different families in Plymouth in 1624. Perhaps none of the colonists have a better record for intelligence, thrift, uprightness and unmixed faith in the Divine One than Henry Howland, and these virtues have permeated the lives of his posterity. In general they are a family of great respectability, and as a people thrifty, economical and good managers of finance, most of them having a fair share of this world’s goods, some amassing millions.

Henry Howland was made a freeman in 1633; was chosen constable for Duxbury in 1635; bought land there in 1640; was for some years surveyor of highways; served repeatedly on the grand jury, etc. He joined the Society of Friends, perhaps 1657, and was not a little persecuted thereafter on this account. In 1652, associated with others, he bought a large tract of land in Dartmouth; was one of the twenty-seven purchasers of what is now Freetown in 1659, and in the division of 1660 he received for his share the sixth lot, which was afterward inherited by his son Samuel Howland. He was one of the grantees of Bridgewater but never lived there. Mr. Howland married Mary Newland, and both likely died at the old homestead in Duxbury. Their children were:

Through Zoeth Howland, son of Henry, and Zoeth’s sons Nathaniel, Benjamin and Henry, have descended the Ancient Dartmouth Howlands alluded to in the foregoing and treated in this article.

Zoeth Howland was born in Duxbury and settled at Dartmouth as early as 1662. He took the oath of fidelity at Duxbury in 1657 and probably about this time with his father became a convert to Quakerism, and meetings were held at his house, for which he was fined. He was killed by the Indians at Pocasset, 21st of 1st month, 1676. Tiverton and Little Compton were known as Pocasset and later Tiverton; and at the present stone bridge was Howland’s ferry, which was later kept by Daniel, son of Zoeth Howland. Zoeth’s widow married (second) in 1676 Richard Kirby. Zoeth’s sons were all active members of the Apponegansett Meeting except Samuel. His children were:

Henry Howland, born 30th of 6th month, 1672, married (first) 3d of 6th month, 1698, Deborah, daughter of Thomas Briggs, of Dartmouth, Mass. She was born in 1674, and died in 1712. Mr. Howland married (second) in 1714 Elizabeth Northup. Mr. Howland was a housebuilder, and did a large business in sawing lumber. His homestead was situated a little west of the Apponegansett Friends’ meeting house, on the opposite side of the road. He seems to have been abundantly honored by his fellow townsmen. He occupied a prominent position in the Friends’ Meeting. He was town treasurer in 1716 and 1722, selectman in 1724-28-29 and constable in 1729. He died in 1766. His children were:

Zoeth Howland (2), born 3d of 11th month, 1701, in Dartmouth, Mass., married Sarah. Mr. Howland was a farmer by occupation, and was living in Dartmouth in 1731. He lived in Westport during the last of his life. His children were:

Isaac Howland, born 30th of 6th month, 1763, in Westport, Mass., married 30th of 12th month, 1784, Lydia, daughter of Thomas Cornell, of Westport. Mr. Howland was a substantial farmer and a citizen of good standing in his native town, where he always lived. His children were:

Peleg C. Howland was born in Westport April 29, 1830, at which time his father, Stephen Howland, lived in that village, and was among the most respected citizens of the place. He received his early education in the public schools of his native town, and supplemented it by study at Mr. Bartlett’s well known school in Poughkeepsie, N. Y. After leaving school he served for a short time as clerk for a firm of grocers in Westport, and entered the Merchants’ Bank as clerk Aug. 13, 1846. At that time John Avery Parker was president of the bank, and James B. Congdon, cashier. The young man undoubtedly felt that he had found an acceptable life work. He slept in the bank, and gave its interests, as far as he was then able, the same watchful care that characterized his after life. Knowledge of the rules and principles of financiring seemed to reach him almost by intuition, and he advanced rapidly. He was made teller of the bank May 30, 1851; was appointed assistant cashier Jan. 10, 1854, and cashier Jan. 1, 1858, to fill the vacancy caused by the resignation of James B. Congdon, who had been in the cashier’s office from the organization of the bank in 1825. This position Mr. Howland held until his death, and his untiring and unselfish devotion to the interests of the institution, his marvelous ability as a financier, ranking among the foremost in the country, his tact, skill and fidelity as a manager, were the subject of widespread commendation. The bank was his pride, and he was completely identified with its interests, giving little attention to the affairs of the community in other directions. Under his gifted and faithful administration the stock of the bank rose to an exceptionally high figure, and it became, and still is, a leading financial institution in this part of the State. Mr. Howland’s death occurred Oct. 26, 1885. The appreciation in which his services were held by his associates in the Merchants’ Bank is fittingly expressed in the following memorial resolutions, which were adopted at a meeting held shortly after his death:

“Resolved, The directors of the Merchants’ National Bank of New Bedford desire to give expression to their sense of the loss which they, and the corporation which they represent, have sustained by the death of Peleg C. Howland, whose connection with the Merchants’ Bank, beginning Aug. 13, 1846, continued after its reorganization under a federal charter until his death on the 26th of October, 1885, a period of thirty-nine years of continuous service; and while it is more fitting that the character of our late cashier in his home and as a citizen should receive proper recognition elsewhere, of his qualities as a man of affairs and of business we may speak; and so speaking we would commemorate his unvarying courtesy of manner, his integrity, his comprehensive grasp of the largest transactions as well as the minutest details – none too minute to receive that attention which was always his best; his rare financial ability; his ripe experience and extensive knowledge of banking; his unstinting devotion to the trusts committed to his charge; his wise foresight and anxious care for the interests of the bank, and his pride in its success – all these combine to make him what he was, and was recognized to be, a model corporation officer and cashier.”