ELDRIDGE (also spelled Eldredge) (Taunton family). Some four generations of this surname have lived in Taunton through the past hundred years, a branch of the ancient Cape Cod Eldridge family. Reference is made to some of the posterity of Eli Eldridge, whose son, Eli Henry, and the latter’s sons, John Henry and Capt. Albert Stanley Eldridge, all either together or in turn have been identified with one of the solid industries of the city – one of their own founding and fostering and developing, which has come to be an important factor in Taunton history. This was the britannia establishment of Eldridge & Co., whose promoters and owners have long been men of substance and prominent in Taunton’s social and business life.

It is possible that William, Robert, Samuel, John and Nathaniel Eldred, for the name was originally so written, who appeared in New England between the years 1635 and 1645, were in some way connected with John Eldred of Great Saxham, in Suffolk, who descended from an ancient family claiming Saxon origin. He was one of the founders of Virginia, and from 1609 to 1624 was a member of His Majesty’s Council for the Virginia Company of London. From this fact and the fact that the Pilgrims who came to America in the “Mayflower,” in 1620, obtained a patent from the London Company – and though contrary winds carried them northward to Cape Cod they had intended to plant their Colony in Virginia, as stated – there may have been some family connection among these Eldreds. Of the early New England Eldred immigrants mentioned, it is thought that William, of Yarmouth, Robert, of Yarmouth and Monomoy, and Samuel, of Cambridge and Stonington, were brothers, and that they came from England about 1635. They all appear to have been men of standing and substance. William was appointed constable in Yarmouth in 1657, 1662, 1674, 1675 and 1677. He married Anne, daughter of William and Tamesin Lumpkin, of Yarmouth.

From Barnabas Eldridge, of Yarmouth, who was a son of Jehosaphat and the latter believed to be a son of William Eldred (above), have descended many of the Cape Cod Eldridges. Through Elisha Eldred, son of William of Yarmouth (above), have descended many of the Connecticut Eldridges. He with others bought in 1693 a tract of land in Harwich. He resided in the south part of the town in what is sometimes denominated the Doane neighborhood. He later sold his land and removed to that part of Eastham which subsequently became Well-fleet. The Christian name Eli occurs in the family in the town of Dennis. One of the descendants of this Cape Cod family was 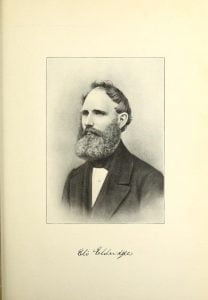 Eli Eldridge, who was born in Harwich, Barnstable county, July 19, 1807, son of William (?) and Lydia (Nickerson) Eldridge. Joseph or Eli Eldridge, probably father of William, was a Revolutionary soldier. Eli’s father died when he was seven years of age, and he had only meager advantages, so that he was essentially a self-made man. He came to Taunton when a boy, and worked for Reed & Barton, and also in the calico works at the Weir. From Reed & Barton he went to Dorchester, and there worked for Roswell & Gleason for three years. Realizing the importance of starting in business he went to Taunton, and worked in the britannia works for one year, at the end of that time starting in business for himself. In 1849, or soon after, he went to California, and remained a few months. He continued in business as long as he lived, and accumulated quite a fair competence. He was always interested in public matters, but never was an office holder. In politics he was a Republican. Fond of good reading, he perused the best in literature, with an especial liking for history. He died Sept. 8, 1875. He married Charlotte Curtis, born June 8, 1798, daughter of Luke and Abigail Curtis, of Bridgewater. She died Sept. 3, 1883. Their children were:

Eli Henry Eldridge, son of Eli and Charlotte (Curtis), born March 26, 1828, in Taunton, Mass., married May 2, 1850, Lydia A., daughter of John and Deborah Thrasher. The early boyhood of Mr. Eldridge was passed on his father’s farm, and in the common schools of his neighborhood, in Taunton, he acquired the rudiments of an education, the conditions about his boyhood being such as to give him but limited school privileges, an attendance of perhaps the three winter months each year in the school of his neighborhood; and even this was given up when he was but fourteen years of age. At this early period he sought and found employment in the britannia works of Messrs. Reed & Barton, of Taunton, beginning with them an apprenticeship at their business. Continuing his services with this concern for some three years, at seventeen he entered the employ of Messrs. Roswell & Gleason, who were engaged in a similar business at Dorchester, and of whose works his father was at the time superintendent. With this establishment he passed the next three years, and, applying himself closely, became quite thoroughly versed in the business of the manufacture of britannia ware. At the expiration of this period he and his father returned to Taunton, and there engaged in the same kind of business for themselves. They began in a limited way and in a building on Britannia street the making of various small articles of britannia ware.

Some years later the son purchased the coffin trimming business of Strange & Frances of that same city, and in 1860 father and son consolidated the two businesses, which took the name of Eldridge & Co., their specialty being the manufacture of coffin name plates, which up to the present has been one of the leading features of the business, which as time passed has fallen into the hands of a younger generation of the family.

In September, 1875, on the death of the elder Mr. Eldridge, the younger took into the business with him his son John Henry Eldridge, and in April, 1890, another son, Albert Stanley Eldridge. The concern, which is further considered later on, now occupies a spacious new building on the street bearing the family name, where are made coffin name plates, hinges, cast head lining tacks, etc. Their trade in these articles extends all over the United States and into portions of South America. Their plant is equipped with the latest improved machinery adapted to their particular line of work. The brothers John H. and Albert S. Eldridge, as will be observed further on, have been brought up in the business and are thoroughly practical men, who keep abreast of the times in all that pertains to their line. Progressive and enterprising, they are continually adding to and increasing their facilities with the most modern patterns.

To Mr. Eli Henry Eldridge and his wife Lydia A. (Thrasher) were born children:

The father of these has been an advocate of temperance through life, and a Republican since the formation of the party, and it goes without saying that he has long been held in high esteem and respect in the community in which practically all his long business career has been passed.

John Henry Eldridge, son of Eli Henry and Lydia Anna (Thrasher) Eldridge, was born Jan. 7, 1853, in Taunton, Mass. He acquired his preliminary education in the public schools of his native city, then was prepared for business at the Bryant & Stratton business college in Boston. Thus equipped for a business career, returning to his home city he entered his father’s establishment and through four years of application in the factory became thoroughly acquainted with the making in detail of casket hardware. He was admitted to a partnership in the father’s business in 1875, and was the former’s associate for the next twenty years. On the retirement of the senior member of the firm, in 1896, his interest was transferred to his two sons, the other being Albert Stanley Eldridge, who had also been a member of the firm for a number of years. These men have since continued the business under the firm style of Eldridge & Co., the same as was adopted by the father in 1848, approximately fifty years before.

Capt. Albert Stanley Eldridge, the younger member of the firm, is also a native of Taunton, where he was born in November, 1859; and after acquiring such education as the Taunton public schools afforded he entered his father’s factory to learn the business of making casket hardware. As the years came and went he grew in knowledge and experience, advancing from factory boy through the different grades to foreman, then to a partnership in the business; purchasing in 1890 a part of his father’s interest in the concern. As stated in the foregoing, the father retired from active business in 1896, and was succeeded by the two sons, who have since carried it on under the firm name of Eldridge & Co., by which it has been known for now some sixty years.

One has only to read between the lines of this brief reference to the Taunton branch of the ancient Eldridge Massachusetts family to judge of its standing in the community where it has for so long a period been through successive generations identified with one of the important industries of the city of Taunton, long noted for the character of its manufactories, as well as for the number of them.

Albert Stanley Eldridge in his earlier life was actively engaged in military affairs. He joined the militia, and through his adaptation for the service and his application rose successively through the different grades until on Nov. 4, 1879. he was made captain of Company G. 1st Regiment, M. V. M. On Nov. 6, 1898, lie was elected a member of the school committee for a term of three years. He belongs to Ionic Lodge, A. F. & A. M.; St. Mark’s Chapter, E. A. M.; New Bedford Council, E. & S. M.; St. John’s Commandery, K. T., of Providence; Palestine Temple, A. A. O. N. M. S.; and the B. P. O. Elks.

On July 21, 1879, Captain Eldridge was married to Mary H., daughter of William Watson, of Taunton, Mass., and three children have been born to them: