KEITH (Taunton family). The family bearing the name of Keith at Taunton, whose head was the late Edwin Keith, Esq., who for some sixty years was engaged in business there and was one of the highly esteemed and respected citizens of the place, for upward of twenty-five years connected with the Taunton Gas Company, long its superintendent and treasurer, and who in various capacities served his adopted town and city officially, is a branch of the ancient Bridgewater Keith family, the progenitor of which was Rev. James Keith, formerly of Scotland, who came to New England and soon thereafter became pastor of the church at Bridgewater, which he . served for fifty and more years.

From this first American ancestor, James Keith, the lineage of the late Edwin Keith, of Taunton, is through Samuel, Robert, Robert (2) and Jonathan Keith. These generations follow in detail and regular order.

James Keith, born in Scotland in 1644, was educated at Aberdeen, came to Boston, Mass., about 1662, and became the first ordained minister of the church at Bridgewater Feb. 18, 1664. His pastorate continued until his death, a period of more than half a century. He owned a one-fifty-sixth proprietary interest in all the lands of Bridgewater. Mr. Keith had much to do with saving the life of the wife and son of the Indian chief, King Philip, in 1676. His death occurred July 23, 1719, in Bridgewater, Massachusetts.

Samuel Keith, son of Rev. James, married in 1703 Bethia, daughter of Deacon Edward Fobes, and they resided in the South parish of Bridgewater, Mass., where Mr. Keith died in 1750. Their children were:

Robert Keith, son of Samuel and Bethia (Fobes) Keith, married in 1741 Tabitha Leach, and their children were:

The will of the father of these children was made in 1787, and he died in 1796, aged seventy-seven years.

Robert Keith (2), son of Robert and Tabitha (Leach) Keith, born in 1742, married in 1763 Silence, daughter of Nathan Hartwell, and their children were:

Jonathan Keith was a soldier in the Revolution. 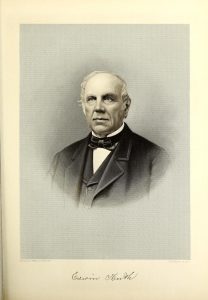 Mr. Keith was reared on a farm and had only such educational advantages as the schools of his town afforded. His uncle, Mr. James Leach, was engaged in business at Taunton, and thither young Edwin went at the age of eighteen years to learn the trade of a machinist under Mr. Leach’s direction, apprenticing himself to him. In due time the young man was taken into partnership with the uncle, and they did business together under the firm style of Leach & Keith. Later, on the dissolution of the firm, Mr. Keith for a time was engaged in the insurance business in Taunton. During the years thus occupied he had so grown in public favor, had established such reputation as a capable business man of probity and integrity, that in 1855 he became identified with the Taunton Gas Light Company, and from thence onward until the time of his death his efforts were unreservedly given to the interests of that corporation, he serving it through all of those years as superintendent, clerk and treasurer. And not only were his qualities of mind and body shown in this company, but as selectman, member of the Taunton common council, director of the Bristol County National Bank, etc. He ever took a deep interest in all matters pertaining to the advancement of his adopted town.

Mr. Keith was a deservedly successful business man. His judgment was considered sound and his counsel was much sought for in business circles, his opinions being always sincerely given when sought. He was a man of exalted character, which in substance follows as portrayed by his biographer, Samuel Hopkins Emery, in his history of Taunton: Mr. Keith was known and loved for his genial temperament and amiable disposition. Though his life was a quiet, undemonstrative one, yet it was eminently a useful one. In the home circle it was said of him that his kindly nature carried always sunshine and peace, and with his sunny temperament were united incorruptible integrity and moral worth. He was a prominent member of the First Congregational Society and Church of Taunton, serving also as deacon of the church many years. He was a constant attendant on public worship, thus encouraging the heart of his pastor and giving his influence in favor of a suitable observance of the Lord’s Day. While he was temperate, moral, strictly virtuous, and rigidly correct in his own deportment, yet his kindly heart was always lenient in judgment of the erring, and his opinions of his fellow men were tinged with the inborn charity of his nature. He was a man whose moral worth all who knew him attest, and Taunton sustained a severe loss in his death.

The death of Mr. Keith occurred at Taunton, Mass., April 30, 1882, suddenly and unexpectedly. He died almost instantly of heart disease. At this time, though well advanced in life, being in his seventy-eighth year, he was still in active business. He had passed upward of sixty years of business life in Taunton. The only child born to Mr. and Mrs. Keith is the present Miss Sarah E. Keith, who occupies the Keith homestead at Taunton, Massachusetts.