The Baylies family of America is descended from Nicholas Baylies, who appears on June 5, 1706, as a witness to the marriage of his son Thomas, and is described as “of the parish of Aloe-Church, County of Worcester.” He was a Quaker in his religious belief.

Thomas Baylies, born in England in 1687, married June 5, 1706, Esther Sargeant, daughter of Thomas Sargeant, of Ffullford-Heath, in the parish of Soby-Hull, County of Warwick. He carried on iron-works in England, first at Colebrookdale, and afterward at some place on the Thames. With his son Nicholas and daughter Esther he came to Boston from London in June, 1737, then returned, and the year after brought over his wife and four daughters, two married daughters remaining in London. After living a short time in Cumberland, R. I., he “leased the industrial establishment on the Mumford river, where Whitinsville is now located, for twenty-one years at £34 a year. They produced or dealt in ‘pigg’ and ‘barr’ iron, nails, ‘ankonys’ and other merchandise; owned cattle and much other property. Their establishment was widely known as Baylies’ Refinery or Finery. The older son, Thomas, Jr., did not appear in this undertaking, but located at Taunton, Mass.” Thomas Baylies died at Uxbridge March 5, 1756. Both he and his wife were Quakers. Their children were:

Nicholas Baylies, son of Thomas, born in Colebrookdale, England, May 19, 1919 (o. s.), died at Taunton, Mass., July 26, 1807. In 1738 he married Elizabeth Park, of Newton, Mass., and they were the parents of seven sons and one daughter. He was interested in the iron-works at Taunton, to which place he removed from Uxbridge, probably not far from the time of his father’s death, and there he lived for forty years and more. He represented the town of Uxbridge in the General Court as early as 1758, and after his removal to Taunton he represented that town in the same body for the political years 1781-82 and 1786-87. He was well known in his day as one of the ablest politicians in Massachusetts, and though English-born was a most efficient supporter of America against English encroachments and through the whole of the Revolutionary struggle. Two of his sons, William and Hodijah, were graduates of Harvard College; the former was distinguished for eminent talent, both as a physician and for varied acquirements in other departments of knowledge. Nicholas Baylies’s children were:

Thomas Sargeant Baylies, son of built up. Mr. Baylies is also heavily interested in whaling ships, the steamer “William Baylies” being named for him. He is a trustee and member of the board of investment of the Five Cents Savings Bank, a director of the First National Bank, and was formerly a director of the Pairpoint Manufacturing Company. For several years he was a member of the New Bedford City Guards. Mr. Baylies is one of the truly self-made men of New Bedford, having made his own way, receiving no assistance whatever. 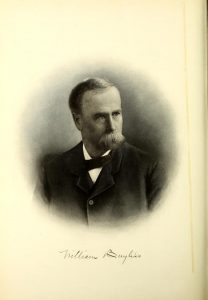