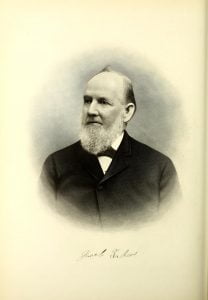 Capt. Jacob Taber, late of New Bedford, and long successfully engaged as a master mariner in the whaling industry, was a descendant of an early settled New England family. He was a direct descendant of Philip Taber, who was at Watertown in 1634, and contributed toward building the galley for the security of the harbor, was made freeman in that same year, and was later at Yarmouth among the first settlers and deputy to Plymouth, 1639-40. Still later he was at the Vineyard, and afterward at New London, Portsmouth, and at Providence and Tiverton, respectively, being a representative from Providence.

Captain Taber was born Aug. 13, 1813, in that part of Ancient Dartmouth, Mass., that later became the town of Acushnet, and in the house in Morse’s Lane built by his great-grand-father and in which had lived his great-grandfather, grandfather and father – Jacob, Stephen and Joseph, respectively. Earlier records of the Taber family are found elsewhere in this publication.

Joseph Taber, father of Capt. Jacob Taber, was a farmer in Acushnet, and there spent his entire life. He married Phebe, daughter of William Ashley, and she was the mother of all his children. After her death Joseph married (second) a Mrs. Dexter, who survived him. His children were:

Born and reared as it were in the land of sailors, it was but natural for young Jacob Taber to imbibe from his environs a liking for the water, and while yet in his teens he began a seafaring life that in the end brought its reward in high reputation in the service and a competence, for he became a safe, able and successful master mariner. Mr. Taber’s boyhood was spent after the manner of the ordinary farmer boy of the period, the summer season being spent in the hard work of the farm and a few months each winter in attending the district school.

Mr. Taber’s first voyage was at the age of nineteen years, in a whaler, the “South Boston” of Fairhaven, commanded by Capt. Sheffield Read. This vessel sailed from Fairhaven in 1832, and after several months in the South Atlantic returned with a good cargo. The following June he went out with Capt. Peter Butler, from Fairhaven, on the “Marcia,” and was gone for thirty-three months to the South Atlantic. He remained with the “Marcia,” going on other voyages, until April, 1838. He then went on the “James Munroe” for four years and then on the ship “Arab,” as second unite under Capt. Benjamin Cushman, in September, 1842. The “Arab” was accompanied by a tender, which was sent home from Desolation island, under command of the “Arab’s” first mate, whose place was taken by Mr. Taber. The “Arab” came home in October, 1845. In 1846 Captain Taber made his first voyage as master. On July 7th of that year he took out from New Bedford the ship “Condor,” to the coast of Chili, being absent twenty months. In July, 1848, he sailed to the northwest coast and Okhotsk sea as master of the “Chandler Price,” being gone nearly three years, and had a very successful trip. Again in 1851 he went to the same waters in the same ship, and was absent nearly three years, and again the catch was a large and profitable one. In 1860 he went to Honolulu and brought home the ship “Abigail,” which had sailed from New Bedford for the Okhotsk sea in 1856. Captain Taber’s next two voyages were to Hudson bay for Jonathan Bourne, Jr., in the ship “Northern Light,” this vessel being the first ship from New Bedford to enter that body of water. He was absent eleven months on the first voyage, from November, 1861, to October, 1862. The second extended from April, 1863, to October, 1864. Captain Taber made his last voyage as a whaling captain on the ship “Three Brothers,” sailing for the Arctic sea in September, 1865, and returning in August, 1869. The two voyages there were highly successful, especially so considering the limited grounds to be covered – 150 miles perhaps – and equally so as to value. The Confederate cruisers and privateers had broken up the Pacific fisheries and prices ruled high. On her first voyage under Captain Taber the “Northern Light” cleared $75,000, and on her second, with nearly the same catch, she brought $105,000 to her owners.

In 1870 Captain Taber went to San Francisco for the late Hon. Charles S. Randall and brought to the home port of New Bedford the bark “Norman.” He then retired from the sea, the remainder of his life being spent in looking after his private interests. From the later sixties until his death, which occurred very suddenly Dec. 16, 1891, his home was on the northeast corner of County and Middle streets.

Captain Taber was wonderfully successful in his chosen calling. He never lost a vessel, was never in distress, and never sustained personal injuries. During all his voyages the record of deaths among his crew reached but six or seven, and of these some were by sickness. He never advanced a claim against any of his underwriters for a single dollar on account of damage.

Captain Taber was a most kindly disposed man, of a jovial and pleasant manner, a man who easily made friends and retained them, and he was highly respected and esteemed by all who knew him. He was a Republican, but his interest in politics was merely a voter’s interest, though he twice served in the common council, in 1872 and 1874, from Ward Three. He was a member of the Chronometer Club, an organization of retired whaling masters.