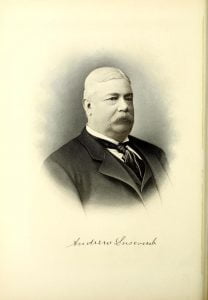 ANDREW LUSCOMB, late of Fall River, where for nearly twenty years before his death he filled the office of president of Kilburn, Lincoln & Company, one of the oldest and best known manufacturing concerns of the city, was a descendant of an old Bristol county family, and one that has resided at Taunton for several generations.

Mr. Luscomb was a native of Taunton, born Dec. 26, 1832, son of Abijah and Adaline (Haskins) Luscomb, and grandson of Abijah and Huldah (Wilbur) Luscomb. The grandfather was engaged as a blacksmith and cooper at Taunton, while the father was a machinist by trade, and followed that occupation for many years, dying in Taunton at the age of seventy-two. He married Adaline Haskins, daughter of Abijah and Deborah (Briggs) Haskins, and they had nine children, one of whom, a daughter, died in infancy, the others being:

Andrew Luscomb received his education in the public schools of Taunton and at Bristol Academy. At an early age he began to learn the trade of machinist with his father in the old brick mill at Taunton, and this trade he thoroughly mastered. Later he was for some years in the employ of William Mason. In 1862 he became associated with the firm of Kilburn, Lincoln & Son at Fall River in the manufacture of musket parts for the United States government, and in 1868, when the firm became an incorporated company, Mr. Luscomb was admitted to partnership, under the firm name of Kilburn, Lincoln & Co., and after the death of his brother-in-law, Henry C. Lincoln, which occurred in 1884, he was chosen president of the corporation, holding this office until his death, which occurred June 23, 1903.

Mr. Luscomb was considered one of the most skilled mechanics, and not only had a large and varied experience in the work of his choice but proved himself to be as well a business man of marked ability. He took an active interest in public affairs for a long time, being the first superintendent of the fire alarm system in Fall River, appointed in 1869, and rendered valuable service in establishing the system in the city. A Republican in political faith, he served as a member of the common council from 1867 to 1872, and alderman in 1873 and 1874. He was a member of the Quequechan Club of Fall River, and of the Home Market Club of Boston.

Mr. Luscomb was a man of the most genial temperament, unostentatious and kindly, yet positive in all his opinions and sound in his judgment.

1 thought on “Family of Andrew Luscomb of Fall River, Massachusetts”