The statistics of the population, wealth and social condition of the Moqui Pueblos show that, although isolated from the Anglo-Saxon, the Moqui Pueblo is amply able to care for himself if aided merely by an issue of those things which will multiply in the future to his advantage.

The enumeration was made by Francis M. Zuck, under the direction of E.S. Clark, supervisor of census for Arizona, as a special census, and the numbers are not included in the general census. The statistics of property and values were secured by Julian Scott, special agent, and the special agent in charge.

All the Indians wear Indian clothing. The oldest man is 96 years and the oldest woman is 94 years of age. By location the population is as follows:

The Moquis consume annually 2,500 of their own sheep and goats, beside what they procure from the Navajos. They sell 26,000 pounds of wool a year to the traders at from S to 9 cents a pound and utilize the remainder in making blankets or garments. They also sell each year many blankets and baskets and some pottery and ornaments and trinkets, in all about $1,000 a year. Money is not as essential to them as to white people, as they produce everything they eat, drink, or wear, except coffee, tea, sugar, and some spices. These they buy from the traders. They have considerable personal property in the way of silver, jewelry, turquoise, household furniture, and blankets. Silver is preferred to gold for jewelry or ornamentation.

The amount of cotton raised and made into cloth is not estimated, but the Moquis used to spin and weave enough cotton to make light summer clothing for their people. Of late years they wear but little clothing of their own manufacture, as they can buy cloth cheaper of the traders than they can raise the cotton.

Its disposition may be estimated as home consumption, 919,200 pounds; bartered to Navajos for sheep, goats, and other items, 650,000 pounds; sales to traders, 150,000 pounds; surplus stored, 700,000 pounds.
This estimate is made from information gathered at the trading posts and s, general observation of the land under cultivation.

The peach orchards and vegetable gardens yield ample fruit and small vegetables and melons. The onion garden at Weepo, used in common, is of great service to these people. There are about 2,000 acres planted in vegetables between the 7 villages that are tilled by the Moquis collectively, distributed thus: first mesa, 500 acres; second mesa, 500 acres; third mesa (Oraibi), 1,000 acres.

The peach orchards are located among the sand hills at the foot of the mesas, with the exception of 2 on the first mesa, 1 on the second, and about 20 on the third. Oraibi is built on one of the lower “benches” of the third mesa: The sands have drifted over the bench toward the north and northwest, forming large hills, which have all been covered with peach trees. The peach, vegetable, and melon crops are worth at least $10,000 per year. The Indians eat great quantities of the peaches when ripe and dry the remainder for winter use.

Value Of The Moqui Realty

The total estimated value of the Moqui realty only includes the area they now use There is water enough to irrigate 6,000 acres more of agricultural land, which would be worth $40 per acre, or $240,000. Besides, the grazing lands adjacent would be greatly benefited.

This estimate of value of the lands is based upon the common and average value of lands of like character in New Mexico and Arizona adjacent to the Moquis, and in view of the fact that considerable outlays for ditches and irrigation will be necessary. Similar lands with water are held in New Mexico and Arizona at from $40 to $50 per acre, and more when buildings are included.

The value of the houses is nominal; still, they are homes. The springs about the Moqui pueblos constitute the value, as water commands the lands. About the first mesa, near Sichumnavi, Tewa, and Walpi, there are three springs, and 3 miles beyond to the north, at Conellabah and Weepo, 1 each, and a mile and a half northeast of Weepo, at Mishongnavi, 2; at Shipaulavi, 1; at Shimopavi, 3; at Oraibi, 5 small ones. There is a spring at Kearns Canyon post office, 1 at the school, 3 miles northeast, and 1 near the ruins of Awatubi.

Houses And Population Of The Moqui Pueblos

The total number of houses in the 7 pueblos is 347. It is difficult to count the houses in any of the 7 Moqui pueblos, there being three ways of counting them, all of which might be correct, yet varying greatly in numbers. For instance, there are 5 long rows of buildings at Oraibi, each row divided into from 28 to 41 sections, and nearly all 3 stories high, thus: first row, 32 sections; second row, 41; third row, 28; fourth row, 30; fifth row, 29; total, 160.

Some of these sections accommodate more than 1 family; then, if the 5 rows be regarded as so many tenement houses, each section could be counted as 2 or 3 houses, but they were estimated in sections and counted, as the houses in our large cities are numbered, thus: 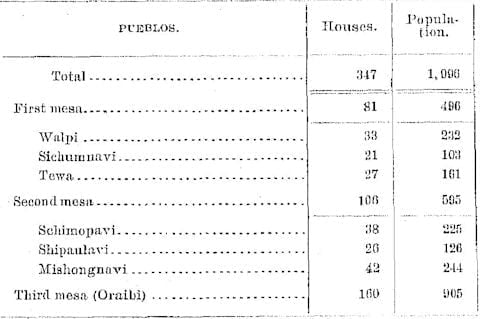 The individual landholders number 255, the areas being from 1 to 16 acres, as follows:

Areas Of Individual Holdings Of Lands For Farming, 1800.