Hollywood has taught us much during the 100+ years of making Westerns. Everyone now knows that the Lakota (Sioux) invented the teepee and that all teepees are made of buffalo hides. By the time that the White Man arrived, the Sioux invention had spread throughout the continent. Those Indians, who didnt have teepees or ride horses all the time, were too poor to even own a teepee, so they had no homes at all.

Did you ever notice that until the filming of the beautiful movie, The New World, there were very, very few movies which portrayed non-Plains Indians and showed them inside their houses? This criticism about the portrayal of indigenous housing styles even applies to another beautiful movie, The Last of the Mohicans. It will indeed be a sign that the Age of Aquarius has dawned, when Hollywood decides to accurately portray the cultures of the Southwest and Southeast that built apartment buildings, which could hold several hundred people.

The teepee is common structure among many indigenous peoples of the northern hemisphere, in particular, the higher latitudes. It was especially common in Siberia, northern Scandinavia and much of North America. Teepees have probably been built for thousands of years by the Sammi (Lapps) of Norway, Sweden, Finland and Russia, where an abundance of domesticated reindeer hides made possible the use of animal skins for shelter. Sammi families live in them to this day during reindeer herding season or on fishing/hunting expeditions. Of course, nowadays, there might be a Volvo SUV parked beside the Sammi teepee!

The structural principals behind a teepee are simple, yet they create a lightweight structure, which is highly resistant to wind pressure in all directions, and when adequately insulated, can keep the occupants comfortable in the coldest of winter weather. The use of saplings and poles for the main structure instead of the heavy posts required in earth lodge construction, reduced the time and energy required to cut the trees with stone axes.

Wooden poles are set into the ground in a circular or oval pattern. The poles are leaned against each other and then securely tied at the top. Wind pressure from one side is transferred by the structural form into the ground on the opposite side. Because of the conical shape, wind pressure is highest next to the ground and least at the top. The conical shape also creates an upward air circulation, which cools the interior in the summer and draws smoke out in the winter. Interior baffles and flaps are suspended above head height in the winter to hold warm air in, while moisture from the breaths of humans inside escapes with the smoke.

How about the Sioux?

At the time which European settlers were first arriving in the Americas, the ancestors of the Dakota, Lakota and Nakota Sioux were living in the Upper Midwestern United States and western Ontario Province. The Santee Sioux still live in Minnesota. There were many Sioux tribes and agricultural towns in Virginia, North Carolina and South Carolina. The original Sioux population there was probably much larger there than among the northern bands. Both the northern and southern branches of the Sioux once lived in round structures with conical roofs. The floors of these houses were often recessed below ground about 12-24 inches. Undoubtedly, all the Sioux hunted the Eastern Woodland bison, and the Northern Sioux sent out bands of hunters into the Dakotas to harvest Western Plains bison.

Once bands of Northern Sioux began moving permanently into the grassy plains of the Dakotas and Alberta, however, they had to adapt to limited wood resources. It is quite likely that their original prairie houses looked something like small Mandan earth lodges. (See article on Mandan earth lodges.) Sod replaced bark shingles as the roofing material. The Sioux hunted whatever game was available near their homes. However, once the Sioux and other Plains tribes, such as the Cheyenne, obtained horses, they learned that by following the annual migrations of the great bison herds, there would be a plentiful supply of meat and hides for the whole year. There was then a need for a form of housing, which was mobile.

As seen in the photos below, the teepee had an ancient tradition in the Great Lakes Basin. However, the skins of such large animals as elk, Eastern Woodland bison and bears were too valuable as raw materials for shoes and winter clothing to be extensively used for housing. The Northern Woodland tribes did not know how to weave cloth, so that was not an option for covering tents and teepees. However, once on the Great Plains and mounted on horses, the Native peoples suddenly had an abundances of bison skins. Also, one of the more plentiful tree species was the Lodge pole pine. Its trunks were straight and relatively thin  perfect for making lightweight teepee poles.

The primary innovation of the Plains tribes was to learn how to cure and sew together sufficiently large sheets of bison leather in order to cover a teepee frame. When it was time for a band to break camp, the leather sheets were folded and placed upon travois  simple triangular pole frames pulled by horses. The combination of an abundance of bison, horses and the mobile, bison hide-sheaved teepee created the relatively short-lived Great Plains Culture that has been so romanticized by the movie industry. Many Sioux bands forgot completely their former agricultural skills in the Great Lakes Basin and became full time hunters. They traded skins and smoked meat with other tribes to obtain whatever agricultural commodities they needed. Military societies developed among the bands because of the need to protect enormous tracts of bison hunting territory from the hunters of competing tribes. 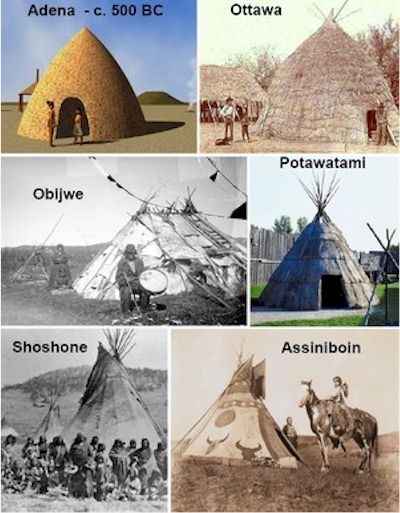