1. Bones. Of the bones found, the skulls were the most interesting. In some cases it would seem as if they alone of the bones had been carried from a distance, perhaps from a distant part of the mound builders’ territory, from a battle field or some other spot. In some cases this was proved, by the presence in the eye-sockets and cavities of clay of a different kind from that of the mound, showing a previous interment. The mound was plainly a sacred spot of the family or sept. Before you are pieces of charred bone. Of the bones unburnt some were of large size. There are before us two skulls, one from the grand mound, the other from the Red River mound opened by the Society in 1879. The following are the measurements of the two skulls which I have made carefully; and alongside the average measurements of the Brachycephalic type given by Dr. Daniel Wilson, as well as of the Dolichocephalic:

From this it will be seen that the Red River mound skulls agree with the Toltecan Brachycephalic type; and the Rainy River skull while not so distinctly Brachycephalic yet is considerably above the average of the Dolichocephalic type.

2. Wood. As already stated it is only in some of the mounds that charred wood is found. This specimen is from the mound at Contcheteheng, at the head of Rainy River. It stands beside the Rapids. This mound has supplied many interesting remains. From this fact as well as from its situation, I would hazard the opinion that here, as at the great Rainy River Falls, three miles farther down, there were villages in the old mound building days. It is a fact worthy of notice that the site of the first French Fort on Rainy River, St. Pierre built by Verandrye in 1731, was a few hundred yards from this mound.

3. Bark. Specimens of birch bark were found near by the bones. It was no doubt originally used for swathing or wrapping the corpses buried. That a soft decayable substance such as bark, should have lasted while a number of bones had decayed may seem strange. No doubt this may be explained in the same way as the presence among the remains in Hochelaga, on the Island of Montreal, of preserved fragments of maize, viz., by its having been scorched. The pieces of bark seem to have been hardened by scorching.

4. Earth. The main earth of the mound is plainly the same as that of the soil surrounding it. By what means the earth was piled up, is a question for speculation. It seems a matter of small moment. Possibly that the earth was carried in baskets, or vessels of considerable size is sufficient to account for it. My theory is that the mound was not erected by a vast company of busy workers as were the pyramids, but that it was begun at first for purposes of observation, that as interments were from time to time made in it sufficient earth was carried up to effect the purpose, until in centuries the enormous aggregate of earth was formed. Among the earth of the mound are also found in spots, quantities of red and yellow ochre. The fact that the skulls and bones seem often to have a reddish tinge, goes to show that the ochre was used for the purpose of ornamentation. Sometimes a skull is drawn out of the firm cast made by it in the earth, and the cast is seen to be reddened by the ochre which was probably smeared over the face of the slain warrior. The ochre is entirely foreign to the earth of which the mound is made, but being earthy remains long after even pottery has gone to decay.

5. Ore. Lying near this skull as if they had been placed in the hands of the corpse were two pieces of metallic ore, one of which is before you. A fresh section of it shows it to be Arsenical Iron Pyrites, each piece weighing four or five ounces. No doubt the shining ore and its heavy weight attracted notice, although it is of no commercial value. The probabilities are that this ore was regarded as sacred, and possibly having been considered valuable was placed beside the corpse as the ancient obolus was laid beside the departed Greek to pay his fare to crusty Charon. 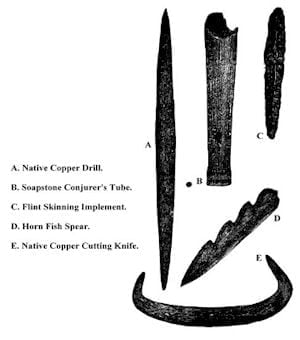 A Lost Race Described by Dr. Bryce, President of the Historical Society of Manitoba, Season 1884-85