The valley of the Gila River near the southeast corner of the White Mountain reservation is from 1 to 2 miles in width. The valley grows gradually narrower to a point about 4 or 5 miles above the mouth of the San Carlos River where it is closed by the near approach of the foothills. Only a limited portion of this valley is susceptible of cultivation for the reason that much of the surface lies too high above the riverbed for practical irrigation. The river bottom expands again at the mouth of the San Carlos and continues down the river to within a mile of the head of the Gila canyon. That portion of the bottom land extending from the San Carlos agency buildings to near the head of the Gila embraces hundreds of acres of good land and could be irrigated and cultivated (portions of it are now cultivated by the Yumas and Apaches) but it is exposed to the sudden and destructive freshets that sometimes rush down the gorges between the foothills hence dams on the Gila must be made strong and the irrigating ditches should be carefully located and constructed. About 2500 Indians live in the portion of the valley described. As previously stated the Gila River is subject to sudden rises and often sinks into the sand during the dry season These characteristics make the raising of grain in this valley very precarious.

Those of the Mohave tribe of Indians who live on the White Mountain reservation are principally scattered along the Gila River on the south side from about 10 miles above the San Carlos agency down to the mouth of the San Carlos River. They live on the narrow bottomlands of the Gila River sometimes however as the weather becomes warmer removing to the hills and mesa land. Good crops can be grown on the Gila bottoms provided the water supply is sufficient. Owing to the conformation of the laud they are exposed to another danger: sometimes tremendous rains fall among the foothills and the water collecting in the gulches and ravines rushes down the arroyos washing away the soil and crops and destroying flumes and ditches. The land in a state of nature is well covered with a growth of mesquite with scattering cottonwood trees. 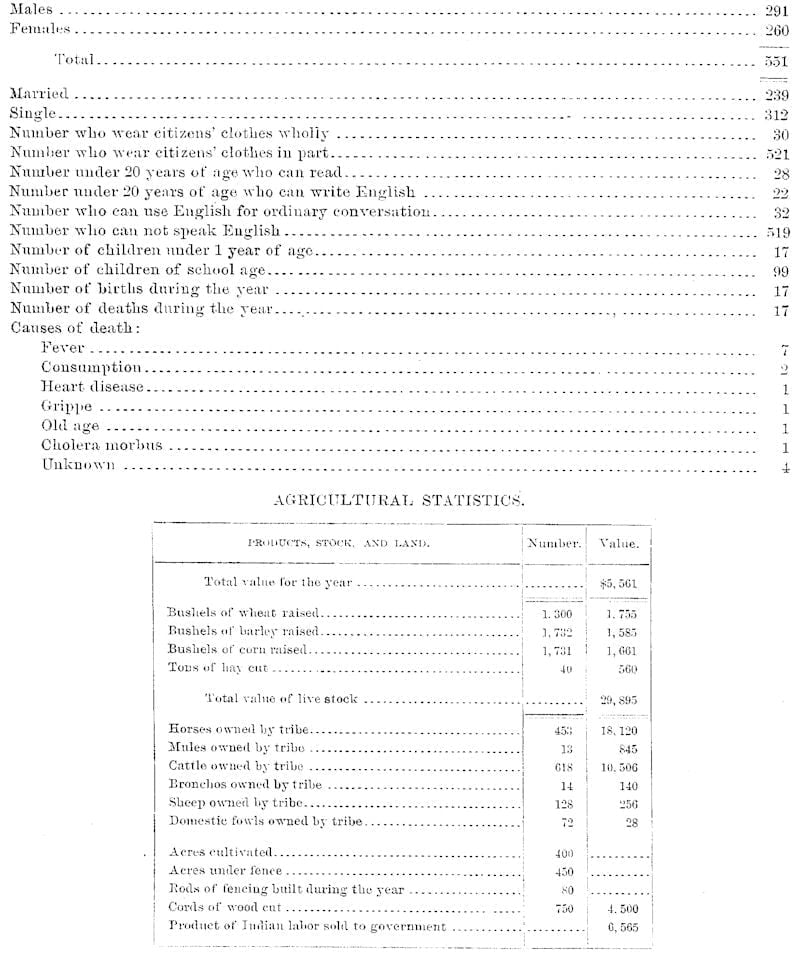 The habitations are rude in the extreme. A few posts in the ground with brush set up about them and sonic crosspieces thrown on the top suffice to partially intercept the sun’s rays. This is the summer habitation. A low but close by with a piece of duck or sheeting to protect them against rain generally suffices for winter. A few plaster up the sides of the hovel and cover the top with mud. Some of the members of the tribe own sheep. They do not spilt or weave the wool but keep the sheep for the flesh only. Like the Apaches and Yumas they are filthy in their habits feeding upon the offal of slaughtered animals and eating various kinds of vermin.

Only a few of this tribe wear citizens dress the great majority still adhering to the Indian costume perhaps because of poverty. The women usually wear a calico skirt reaching to the ankles and fastened about the hips and a blouse or tunic covers the upper portion of the body and arms. The old women seem to be almost destitute of modesty which to some extent characterizes the younger class of women and a scant piece of cloth pinned or tied around the shoulders is usually the only upper garment or covering. The women may be seen carrying immense loads of hay fodder wood or provisions. They also provide water for the family often carrying 5 or 6 gallons on their backs for a long distance. Baskets in the form of an olla ingeniously made from willow and grass are made to do the duty of pails or other water vessels.

Like most other Indians the Mohaves are fond of strong drink. They manufacture tiswin from fruit or corn and indulge in a spree whenever they can. Prostitution is becoming quite common among them and venereal diseases are becoming widespread. These two causes tend to diminish the vitality of the tribe and they are scarcely maintaining their position as to numbers.

As the Mohaves occupy a portion of the White Mountain reservation with the Apaches and Yumas the remarks concerning temperature rainfall and irrigation under the head of Apaches will apply to the Yumas and Mohaves. Rations are issued to them the same as to the Apaches.

A remnant of this tribe lives on the White Mountain reservation near the San Carlos agency on the south side of the Gila river. They speak the Navajo language and bear a very close resemblance to that tribe with which they often intermarry.

Temperature rainfall and irrigation have been fully discussed under the head of Apaches and. the tribe has made about the same progress in every respect as that made by the Apaches.

The following tables show the amount of agricultural products and other statistics: 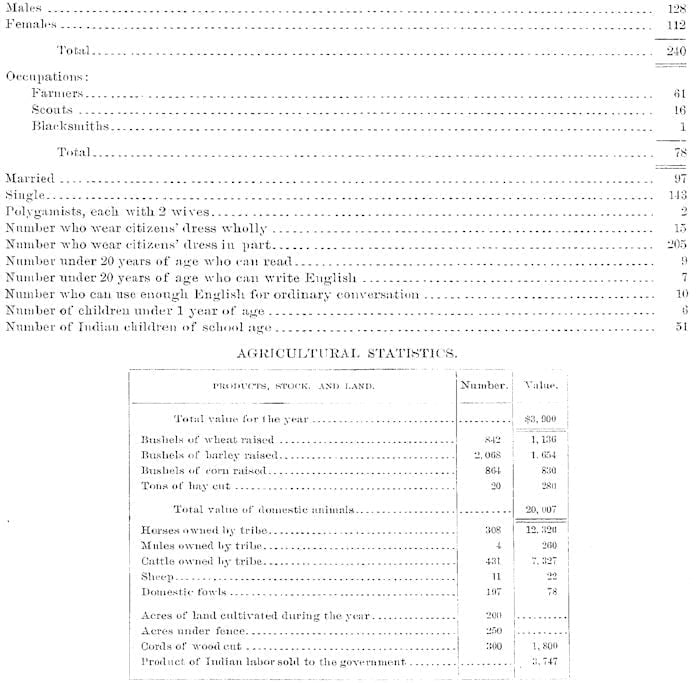 The Yumas are peaceable and inoffensive. They are not often accused of theft but they are inveterate gamblers often going to the gaming ground on one pony leading another and perhaps returning on foot. The men waste much of their time in idleness. Prostitution seems to be alarmingly on the increase and venereal diseases are growing more and more prevalent. Of the 5 deaths recorded for the year ended. June 30 1890 2 were caused by syphilis.

They live in the same kind of huts that have protected them for many generations. Some posts set in the ground with poles and brush laid transversely on the top serve as a shade during the hot weather. A smaller one close at hand covered with willows and dirt or possibly a piece of canvas protects them during the more inclement season. The inside is destitute of all furniture except that of the most primitive kind.

They seem to have no forms or objects of worship. They are ignorant and superstitious. It is said that the hooting of an owl or the barking of a coyote inspires them with terror and report has it that they never kill the one nor the other. They do not believe in a good spirit but are always intent on driving away evil spirits which cause them all their unhappiness. For example health is not brought about by any good spirit but sickness is occasioned by the presence or instrumentality of an evil spirit that must be propitiated or frightened away by noises incantations or importunity. They do not believe in a continued future state of existence but in their imagination the dead hover about for a time and are eventually forgotten. There is no account of any Christian missionary among any of the tribes of this reservation.

The Yumas Mohaves and Apaches located at the San Carlos agency draw rations from the government distributed weekly. The agent was buying beef cattle in the open market to supply rations. The practice was to have the steers driven into the corral on Wednesday evening of each week. They were weighed and slaughtered on Thursday morning and cut up and distributed on Thursday afternoon and Friday morning. The quantity issued per person was 1.3 pounds. Three lots of cattle weighed in as many weeks would be classed as third class steers in Iowa their average weight being about 910 pounds. They appeared to have been driven hard apparently having had scant feed.

The Pimas and Papagos raise and kill their own cattle. Some of the Pimas are good butchers. They furnished the agency and school at Sacaton with beef.

Suggestions as to the Arizona Indians

In regard to the future Indian policy I would suggest that good practical reliable men be sent among the agency Indians to instruct them in farming and stock raising. Especially should they be encouraged to grow alfalfa with which to feed cattle and horses. Their ponies are small with their buttocks and necks degenerated by careless breeding and bard usage. Medium sized horses should be sent among them for breeding purposes. Some large horses have been sent out for that purpose but for obvious reasons they were but little used.

My opinion is that the Indians on the Salt River Gila River and Papago reservations should be encouraged to give more attention to cattle raising as they are but a few miles from railroad transportation and could ship their cattle if they were fat. Almost all of the men are natural herders. The government would gain by giving individual Indians small bands of cattle and agricultural implements to those who want to learn farming.

As to army control I venture the suggestion that 200 mounted Indian scouts officered by efficient white men would preserve order among the Apache tribe much better and vastly cheaper than the garrisons that are maintained there at this time. If they are to remain however I would move them just outside the reservation. On the other band the present garrisons are great consumers of food and produce and the camps furnish a ready market for many things produced by the Indians but I believe the day is past when a large force of soldiers should be maintained on reservations.