Extend the two forefingers and after placing them parallel near together in front of the chest, backs upward, push them rapidly forward about a foot. (Dakota IV.)

Place both hands, with the forefingers only extended and pointing forward side by side with the palms down, before the body; then push them alternately backward and forward, in imitation of the movement of horses who are running “neck and neck.” (Ute I; Apache I, II.)

Hold the left hand as in the sign for Horse, Packing a, and lay the semiflexed right hand across its upper edge two or three times, the ends of the right fingers toward the left. (Dakota IV.) 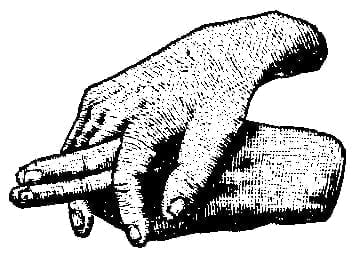 Place the extended and separated fingers rapidly with a slapping sound astraddle the extended fore and second fingers of the left hand. The sound is produced by the palm of the right hand which comes in contact with the upper surface of the left. (Ute I.) Fig. 267.

The hands are held with the edge upward, and the right hand strikes the other transversely, as in the act of chopping. This sign seems to be more particularly applicable to convey the idea of death produced by a blow of the tomahawk or war-club. (Long.)

Clinch the hand and strike from above downward. (Wied.) I do not remember this. I have given you the sign for killing with a stroke. (Matthews.) There is an evident similarity in conception and execution between the (Oto and Missouri I) sign and Wied‘s. (Boteler.) I have frequently seen this sign made by the Arikara, Gros Ventre, and Mandan Indians at Fort Berthold Agency. (McChesney.) This motion, which maybe more clearly expressed as the downward thrust of a knife held in the clinched hand, is still used by many tribes for the general idea of “kill,” and illustrates the antiquity of the knife as a weapon. Wied does not say whether the clinched hand is thrust downward with the edge or the knuckles forward. The latter is now the almost universal usage among the same tribes from which he is supposed to have taken his list of signs, and indicates the thrust of a knife more decisively than if the fist were moved with the edge in advance. The actual employment of arrow, gun, or club in taking life, is, however, often specified by appropriate gesture.

Right hand clinched, thumb lying along the finger tips, elevated to near the shoulder, strike downward and out vaguely in the direction of the object to be killed. The abstract sign for kill is simply to clinch the right hand in the manner described and strike it 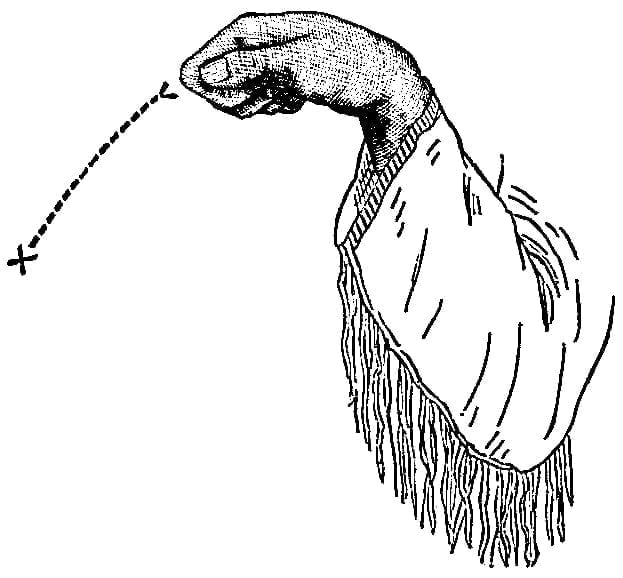 down and out from the right side. (CheyenneII.)

Close the right hand, extending the forefinger alone; point toward the breast, then throw from you forward, bringing the hand toward the ground. (Ojibwa V; Omaha I.)

Both hands clinched, with the thumbs resting against the middle joints of the forefingers, hold the left transversely in front of and as high as the breast, then push the right, palm down, quickly over and down in front of the left. (Absaroka I; Shoshoni and Banak I.) “To force underliterally.”

With the dexter fist carried to the front of the body at the right side, strike downward and outward several times, with back of hand upward, thumb toward the left, several times. (Dakota I.) “Strike down.”

With the first and second joints of the fingers of the right hand bent, end of thumb against the middle of the index, palm downward, move the hand energetically forward and downward from a foot in front of the right breast. Striking with a stoneman’s first weapon. (Dakota, IV.) 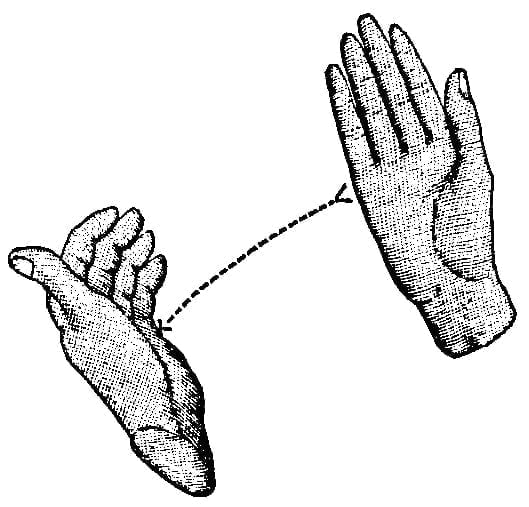 The left hand, thumb up, back forward, not very rigidly extended, is held before the chest and struck in the palm with the outer edge of the right hand. (Mandan and HidatsaI.) “To kill with a blow; to deal the death blow.” Fig. 269.

Right hand, fingers open but slightly curved, palm to the left; move downward, describing a curve. (Omaha I.)
Another: Similar to the last, but the index finger is extended, pointing in front of you, the other fingers but half open. (Omaha I.)

Place the flat right hand, palm down, at arm’s length to the right, bring it quickly, horizontally, to the side of the head, then make the sign for Dead. (Ojibwa V; Wyandot I.) “To strike with a club, dead.”

Both hands, in positions (AA), with arms semiflexed toward the body, make the forward rotary sign with the clinched fists as in fighting; the right hand is then raised from the left outward, as clutching a knife with the blade pointing downward and inward toward the left fist; the left fist, being held in situ, is struck now by the right, edgewise as above described, and both suddenly fall together. (Oto and Missouri I.) “To strike down in battle with a knife. Indians seldom disagree or kill another in times of tribal peace.”

Strike a blow in the air with the clinched fist, and then incline the head to one side, and lower the open hand, palm upward. (Ballard.)

Strike the other hand with the fist, or point a gun, and, having shot, suddenly point to your breast with the finger, and hold your head sidewise on the hand. (Cross.)

Use the closed hand as if to strike, and then move back the head with the eyes shut and the mouth opened. (Hasenstab.)

Put the head down over the breast, and then move down the stretched hand along the neck. (Larson.)

Draw finger across the throat like cutting with a knife. (Barnum.)

Make the sign for Battle by placing both hands at the height of the breast, palms facing, the left forward from the left shoulder, the right outward and forward from the right, fingers pointing up and spread, move them alternately toward and from one another; then strike the back of the fingers of the right hand into the slightly curved palm of the left, immediately afterward throwing the right outward and downward toward the right. (Ute I.) “Killed and falling over.”

Direct the right hand toward the offender and spring the finger from the thumb, as in the act of sprinkling water. (Long.) The conception is perhaps “causing blood to flow,” or, perhaps, “sputtering away the life,” though there is a strong similarity to the motion used for the discharge of a gun or arrow.

Remarks and illustrations connected with the signs for kill appear on pages 377 and 378, supra.

Clinch the right hand and strike forcibly toward the ground before the breast from the height of the face. (Ute I.) “Appears to have originated when flint knives were still used.”

No, Not (Compare Nothing)

The hand held up before the face, with the palm outward and vibrated to and fro. (Dunbar.)

The right hand waved outward to the right with the thumb upward. (Long; Creel.)

Wave the right hand quickly by and in front of the face toward the right. (Wied.) Refusing to accept the idea or statement presented.

Move the hand from right to left, as if motioning away. This sign also means “I’ll have nothing to do with you.” (Burton.)

A deprecatory wave of the right hand from front to right, fingers extended and joined. (Arapaho I; Cheyenne V.)

Right-hand fingers extended together, side of hand in front of and facing the face, in front of the mouth and waved suddenly to the right. (Cheyenne II.)

Place the right hand extended before the body, fingers pointing upward, palm to the front, then throw the hand outward to the right, and slightly downward. (Absaroka I; Hidatsa I; Arikara I.) See Fig. 65, page 290.

The right hand, horizontal, palm toward the left, is pushed sidewise outward and toward the right from in front of the left breast. No, none, I have none, etc., are all expressed by this sign. Often these Indians for no will simply shake the head to the right and left. This sign, although it may have originally been introduced from the white people’s habit of shaking the head to express “no,” has been in use among them for as long as the oldest people can remember, yet they do not use the variant to express “yes.” (Dakota I.) “Dismissing the idea, etc.”

Place the opened relaxed right hand, pointing toward the left, back forward, in front of the nose or as low as the breast, and throw it forward and outward about eighteen inches. Some at the same time turn the palm upward. Or make the sign at the height of the breast with both hands. Represents the shaking of the head. (Dakota IV.) The shaking of the head in negation is not so universal or “natural” as is popularly supposed, for the ancient Greeks, followed by the modern Turks and rustic Italians, threw the head back, instead of shaking it, for “no.” Rabelais makes Pantagruel (Book 3) show by many quotations from the ancients how the shaking of the head was a frequent if not universal concomitant of oracular utterancenot connected with negation.

Sign Language Among North American Indians Compared with that Among Other Peoples and Deaf-Mutes. 1881