The following notice of election of Levi Gritts, Chief of the Cherokees is a splendid written document and fully explains the necessity and importance of the election:

My dear Mr. Gritts:Pursuant to a well defined plan and program of the Nighthawk Keetoowah of Full-blood Cherokee Indians, you have seen desig­nated by the Council of said Society to serve our suffering cause in the capacity of CHIEF OF THE CHEROKEES.

With the death of the late Chief Rogers, terminated the officially recognized position of Cherokee Chief. The elimination of this office seemed at the time to be natural and it was the consensus of opinion on the part of the Cherokees themselves as well as the Departmental administrators of our affairs that there was no further need of the office of a Chief in our changed conditions.

Your attention is respectfully invited to the following analysis as we have in our humble way, been able to reach:

Taking the Full-blood, particularly the Nighthawk Keetoowahs, as a basis of this analysis, we find, first; That beginning with the trying times of the year Nineteen Hundred, these people were overwhelmed with what seemed to them an attempt on the part of the United States government to divest them of what they considered their vested rights; they were all too suddenly divested of the rights and prerogatives of self determination in their National governmental affairs, with the result that they eventually crystallized into a recalcitrant attitude. They looked askance upon every movement of the government, taking the position that every move now, meant exploitation of what little they may have left of a once vast holdings. 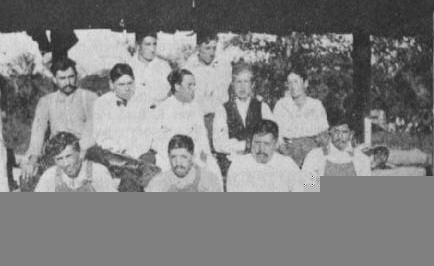 This unfortunate position was largely justified and amplified by the fact that a large number of their own blood, who had been fortunate enough to have received the advantages of literary training, now became the allies of the unscrupulous and exploiting hordes, who infested the country during the said trying times, an element, who seem to destiny itself to have designed to always precede the wholesome citizenry, who eventually supersede and predominate, and held full sway for a number of years.

A further elaboration of this particular phase of our analysis is unnecessary with you, who lived and survived through a period of bitter and trying experiences. The incarceration of an educated Full-blood Indian in a Penal Institution of our new state was not beyond the intelligence of our Full-bloods. They recognized the brazen rebuke and the NOTICE TO THEM of their futile and hopeless position as a group and kind.

Proceeding now to the SECOND and final analysis, we submit the following deductions: The advance and gradual increase numerically of the substantial class of citizens, home builders and hence nation builders, and the two decades of close contact and living in the atmosphere of intensive constructive effort, of which our young state stands without a precedent; and last but not least, the loyal and unequivocal response of not only our Full-blood Nighthawks but of all the American Indians, to the Nations call to Arms and Service in our recent World Struggle; all contribute to rehabilitate the Indians self respect and confidence in themselves, as well as confidence in the integrity of purpose in their behalf on the part of the Government of the United States.

It is gratifying to note, that with all the effusive commendations and extravagant expressions of appreciation on the part of the American people, for the creditable manner in which our people acquitted themselves in the War with Germany, the Indians have not become imbued with the idea of self-importance. In fact, the Indians of America merely had a chance to show what is inherently in them as a race. In their own estimation they did no more than any loyal citizen should have done. It was a spontaneous reciprocal response to a Great Government, who by virtue of being entangled in a World crisis, called upon its whole people to a united effort.

There is carried with this, a new psychological angle so far as the Full-blood Indian is concerned For the first time in history he realizes through the attitude of the United States Government, that his material effects and his manhood are a National asset; that he is a part and parcel of the body politic of a great Commonwealth He is alert to the responsibilities of his new position. He is expecting participation in the administration of his affairs. He is keenly cognizant and sensible of the new responsibilities with which he is about to be endowed. Within a decade the restricted period shall terminate and during that same space of time all our Claims against our Government may he adjudicated and finally settled.

Now, confidently and sincerely these Full-blood Cherokees point out that by virtue of their new position and relations they must come into closer touch and cooperation with the supervisory and administrative agencies of the Government, and of their number many have no other means of communication except through the medium of the Cherokee language. These conditions demand and require more than a mere Official Interpreter at the Departmental offices.

From now on for the next few years the Cherokees must have a real REPRESENTATIVE at the headquarters of the Five Civilized Tribes agency, for the following potent reasons: First, the unrestricted intermarried and mixed-blood Cherokee citizens while to all intents and purposes are like any white American citizens, they are interested and have equitable rights in all matters pertaining to our unadjusted claims against the United States, it is of imperative importance that their efforts should coordinate with our efforts in the accomplishment of said adjustments. This can be achieved by uniting all forces through the one proposed REPRESENTATIVE. Secondly, the restricted full-bloods, who are still possessed of restricted landed assets as well as restricted funds, are most vitally interested in the administerial agencies of the Government, particularly at this time of anticipated important changes in the personnel as well as policies in the Departments directly affecting them. This group being largely composed of non-English speaking people, and being by custom and practice trained to do their business through a Chief, it is but natural and logical that now, when a united Cherokee effort is so apparently necessary to accomplish anything for the good of all, they should de­mand and designate a CHIEF.

Our determination on you for the place is not because of our desire to confer an HONORARY position upon you, as a recognition of your former positions in our behalf, but because we know your DEPENDABILITY AND EFFICIENT QUALIFICATIONS for such responsibility. You are a Full-blood Cherokee, reared and developed under Full-blood life conditions. You understand and sympathize with the thought and life of the Full-blood. You have had the advantages of an academic training. You are master of both the Cherokee and the English languages. You have survived the crucial test of the transition period of the last decade in our country. You have reached the age of calm and conservative discernment. Those enumerated experiences and advantages of your life, together with your native-born ambitions for your people, commend you as a safe and sane leader and counselor for us all.

We, of the Nighthawk Keetoowah contingent of the Cherokee Indians repose implicit confidence in the integrity of your thought and regard for the various groups and interests of our people and sincerely feel that you are capable and will render us most valuable service.

In accepting the arduous task we are thrusting upon you, we desire to urge the necessity of immediate action and cooperation of the other factors and groups to the end that we may be properly and effectively organized for a united effort in the prosecution of our various interests. We believe that now is the opportune time to make our representations to the dispensers of patronage of the incoming administration. If the Indian manhood and his material assets were of so vital a part to the United States in time of trouble, it is certainly no more than just and right that we participate in a careful selec­tion of men of recognized caliber coupled with unimpeachable character for administrators of our material possessions of millions of dollars in value, as well as the more momentous question of our moral and intellectual development. 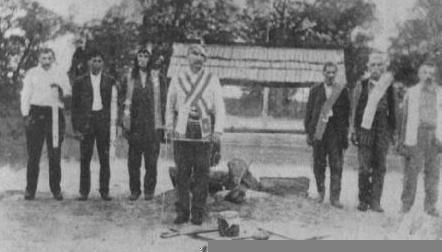 The office of COMMISSIONER OF INDIAN AFFAIRS is one of paramount interest to every Indian of the United States. Next in importance, particularly insofar as we are concerned, is the office of Superintendent of The Five Civilized Tribes and it is absolutely necessary that a petition in this matter be immediately submitted to the proper sources of authority, to the end that the demands of our INTERESTS may receive a satisfactory degree of consideration.

You are therefore, by virtue hereof, and the urgent immediate demands of our interests, and the interests of all the Cherokees, made and constituted the CHEROKEE CHIEF.

With sincere regard and respect,

Starr, Emmett. History of the Cherokee Indians and Their Legends and Folk Lore. Oklahoma City, Oklahoma: The Warden Company. 1921