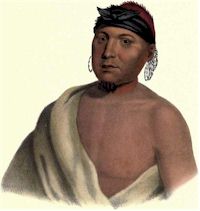 This person was the principal chief of the Fox, or Musquakee tribe, and was considered a peaceable, well disposed man. An Indian of such a character has little history; if not signalized by exploits of war, revenge, or depredation, his slothful life is expended in pursuits which afford no incident worthy of record. His summers are spent in the chase, and his winters in sleep.

The Musquakee, as is remarked in another place, are the remnant of a tribe once powerful, but now incorporated with the Sauk, and the chief has but a narrow sphere of duty or influence.

Although Peahmuska lived an inoffensive, reputable life, we are sorry to record that he died by violence. He was proceeding, a few years ago, to Prairie du Chien, with a small party, consisting of eight or ten warriors of his tribe, and had encamped for the night within a day’s journey of that place, when a party of Menominie, who had secretly pursued them, surprised the sleeping band and murdered them all except one, who had the good fortune to escape. In revenge for this massacre, a war party of Sauk and Foxes after wards stole upon a number of Menomonie, at Prairie du Chien, and slew them all, within sight of the American fort. The commanding officer, considering his authority insulted, and desiring to put a stop to these retaliatory measures, demanded of the Sauk the delivery of the murderers; but Keokuk, the head chief, replied that they were so numerous that it was impossible for him to take them. The offenders, in the mean while, expecting that some at tempt would be made by the agents of the American government, to punish their audacity, had banded themselves under Black Hawk, and were preparing for war. It was during the existence of this state of excitement, that some other collisions took place, which led to the war in which Black Hawk figured as the principal leader.

The Sauk and Foxes are considered to be an hospitable people, and friendly to the whites; but, in the prosecution of their wars, or schemes of revenge, are regarded, even by the Indians, as remark ably cunning and treacherous. They relate of themselves, with great exultation, an exploit which they deem highly creditable to their character as warriors. A party of them, while on a hunting expedition, fell in with an equal number of Ioway, with whom they were then at peace, but against whom they cherished a secret hatred, arising out of some ancient feud. Professing to be delighted at the meeting, they invited the Ioway to a feast; and when their unsuspecting guests were seated round the banquet, .consisting of a roasted dog, each warrior of the Sauk and Fox party selecting his victim, the whole of the Ioway were shot at the same instant; after which the murderers devoured the feast in triumph. Such are the daring and the chivalry of the red man; such the deeds of gratuitous extermination which often characterize them, and which, in connection with other destroying influences, are operating in pass ing these people away from among the nations of the earth.

McKenny, Thomas & Hall, James & Todd, Hatherly & Todd, Joseph. History of the Indian tribes of North America: with biographical sketches and anecdotes of the principal chiefs. Embellished with one hundred portraits from the Indian Gallery in the War Department at Washington. Philadelphia: D. Rice & Co. 1872.