AccessGenealogy.com contains the largest collection of free genealogy for your United States research. Find hundreds of thousands of free websites with billions of names you can use to further your family genealogy! Specifically, we provide sources for birth records, death records, marriage records, census records, tax records, church records, court records, military records, historical newspapers, cemeteries, and ethnic records. We also provide some historical details about different times and people in America’s history. Our specialty, however, is Native American genealogy and research. You can always access our Native American collection of material, by using the link at the top of every page.

Access Genealogy directs researchers to free United States genealogy resources online. We do this in two methods, by categorizing your search (links in the menu at the top of every page) or by enabling you to search by locality (links on the right of every page under the US Genealogy heading).

Our search is found on the right of every page, but remember it only searches our website, and not the hundreds of thousands we link to. It also doesn’t search our databases. You will need to search those one-by-one.

If you wish to stay up-to-date with each of our new posts, then subscribe to AccessGenealogy. Be forewarned, we do add pages frequently, so you may get multiple emails each day. If you would prefer, you can find us at AccessGenealogy on Facebook and receive notifications in that manner!

Featured items from within our collections 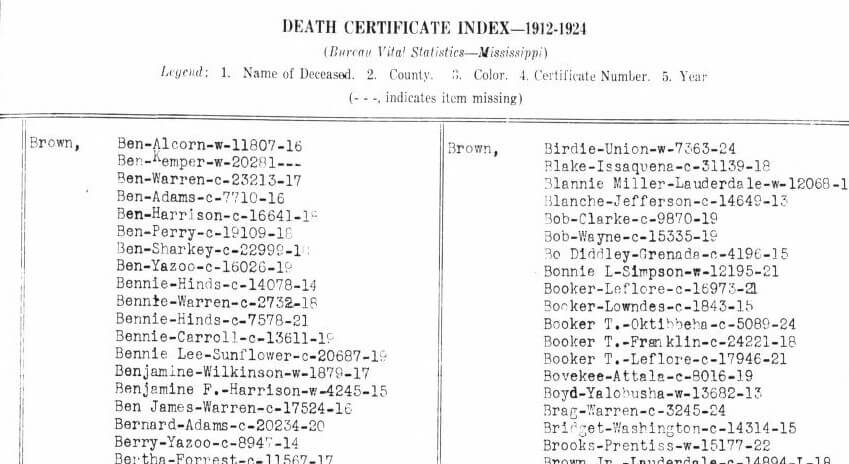 December 3, 2019 3 Comments
Christopher Smothers, a college student, and professional genealogist who specializes in Deep South research, always wondered to himself why the Mississippi Death index for 1912-1943 was hidden at the Mississippi Department of Archives and History in Jackson Mississippi. Why wasn’t this more widely available? Fast forward a few years, and…
Read More 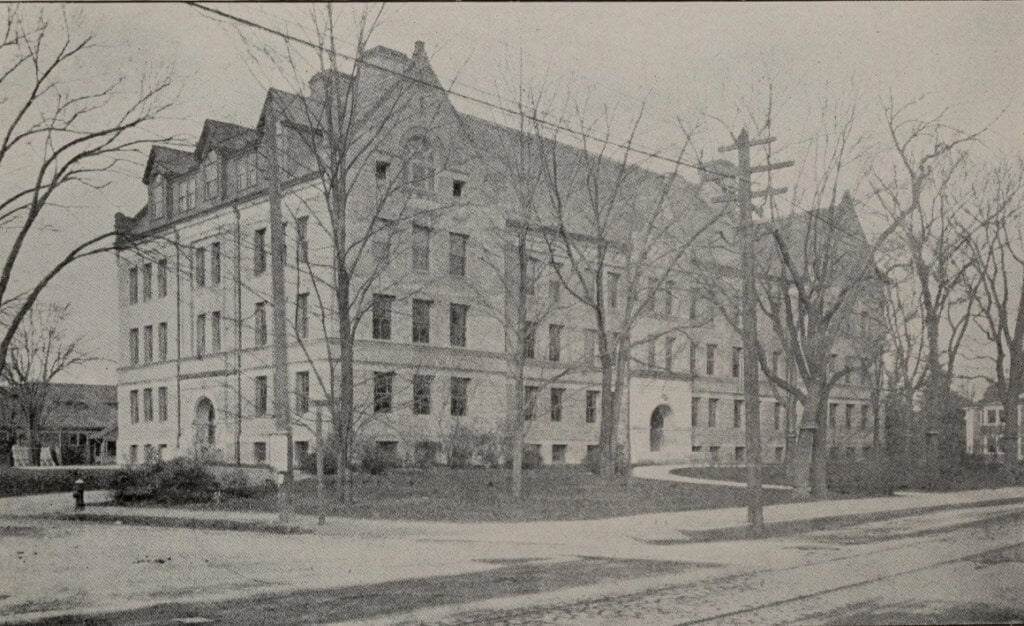 June 28, 2019 3 Comments
The Newton Public Library has uploaded all of the Newton High School Yearbooks from 1910 through 2012 to InternetArchive. We provide quick links to each edition in chronological order below. Each link takes you to the volume for that year (some years had 2 volumes) enabling you to peruse and…
Read More 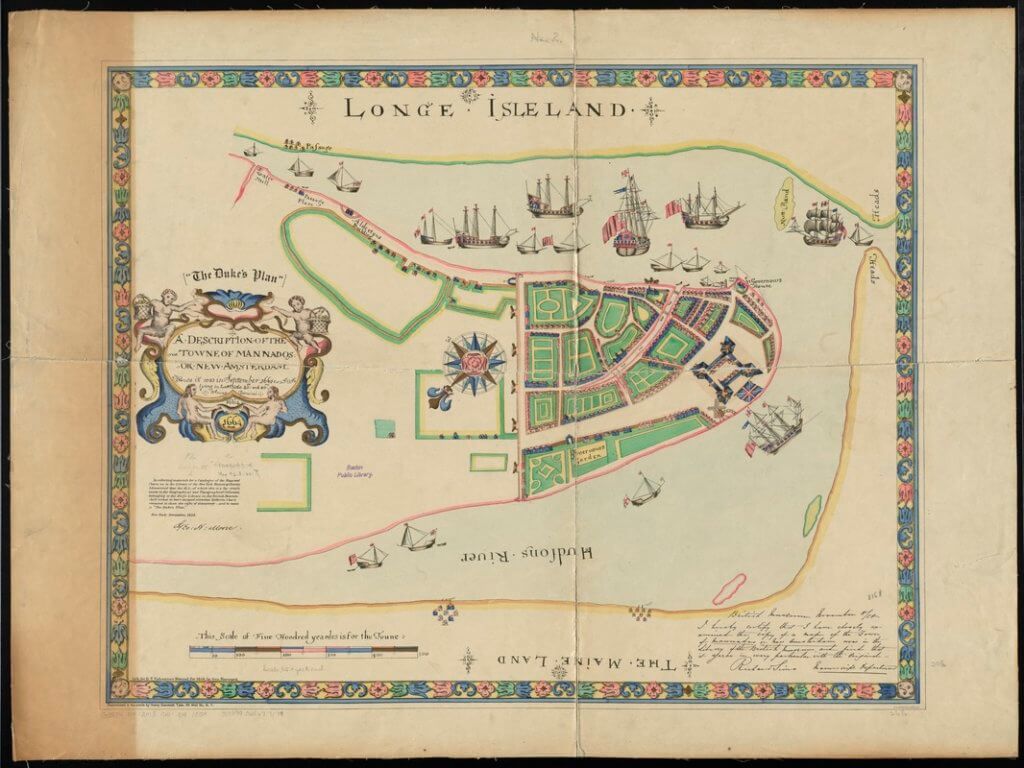 April 8, 2019 2 Comments
This work contains the earliest Dutch Records that have been preserved of the territory included in the present City of New York, the earlier ones having long ago disappeared. These are “The Minutes of the Burgomasters and Schepens of New Amsterdam from 1653 to 1674,” but contain a very few…
Read More 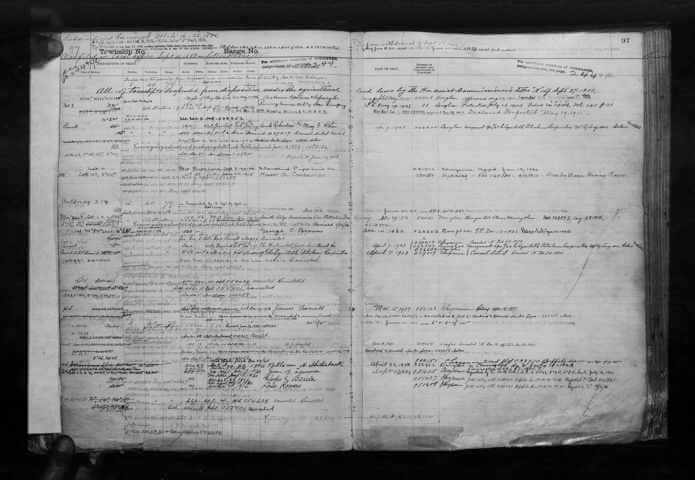 May 11, 2018 4 Comments
3,907 land management tract books containing official records of the land status and transactions involving surveyed public lands arranged by state and then by township and range. These books indicate who obtained the land, and include a physical description of the tract and where the land is located. The type…
Read More 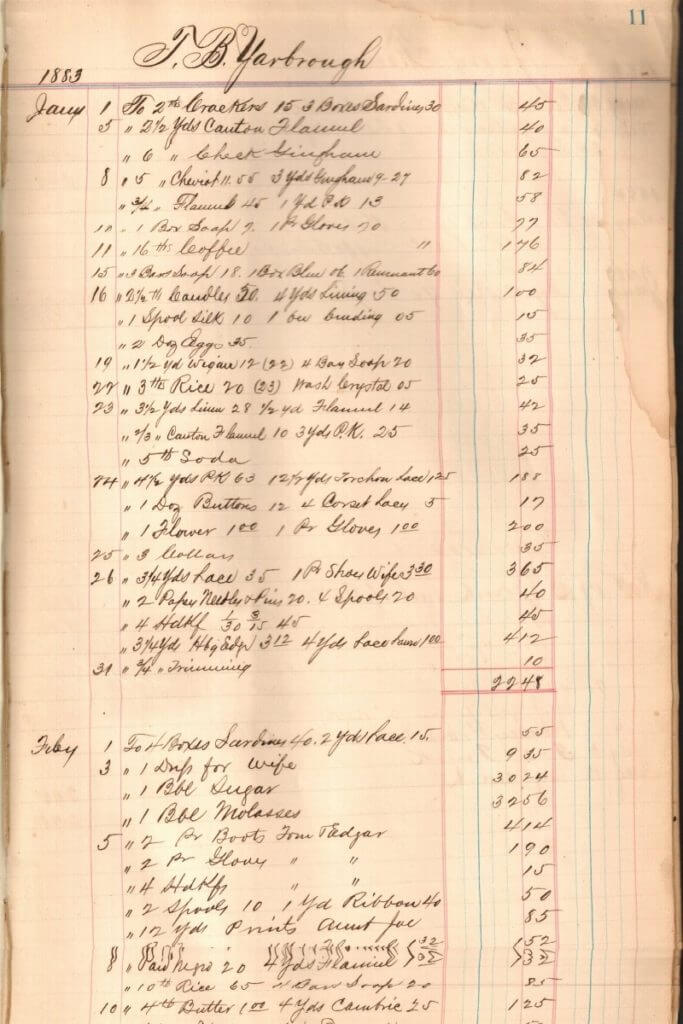 May 2, 2018 No Comments
Original images, and index, of Thomas B. Yarbrough’s store ledger which he kept while conducting business in Honey Grove, Texas. Volume 1 covers the years of 1 Jan 1883-Jul 1884.
Read More

April 17, 2018 2 Comments
This collection comprises a total of 65 directories which cover the years of 1848-1972 (incomplete). This collection contains materials from the Cambridge Room, the Cambridge Public Library’s Archives and Special Collections. We have linked to the main page for each directory, enabling you to either browse the directory like a…
Read More 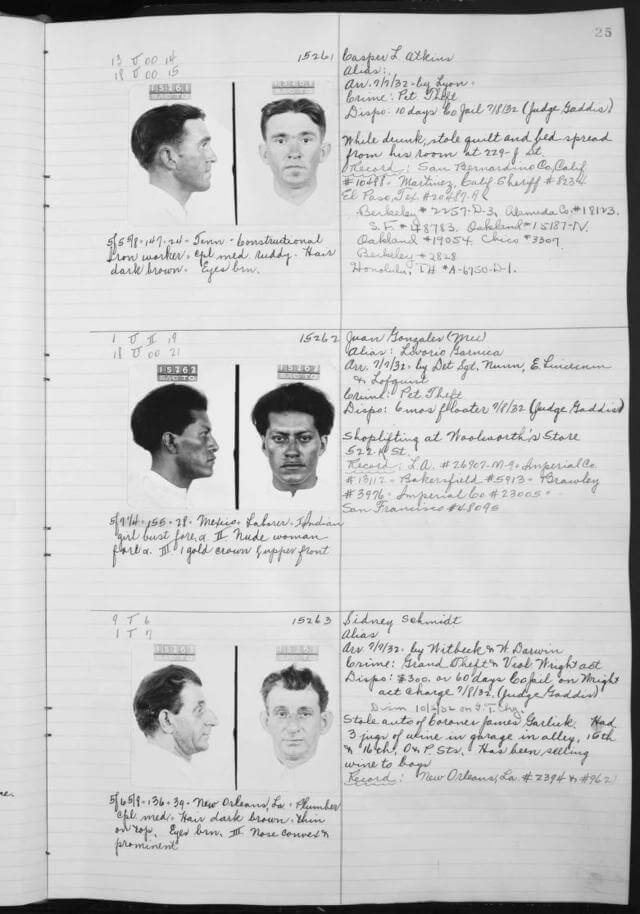 March 30, 2018 1 Comment
Mug Books of the past have been replaced by computer databases now, but back before the days of computers and databases, they served as an effective method for Police Departments to keep track of past criminals and wanted people. The Sacramento Police Department has generously provided these scanned images to…
Read More 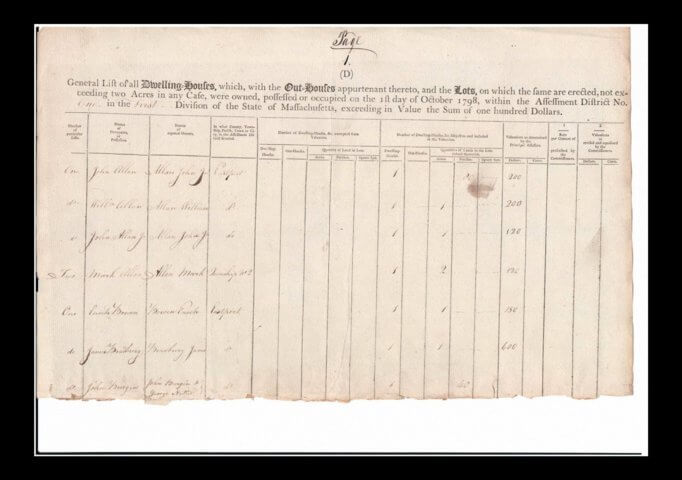 March 14, 2018 4 Comments
The Massachusetts Tax Valuation List of 1771 contains the names and descriptions of taxable property of nearly 38,000 individuals who resided in 152 Massachusetts towns in 1771
Read More 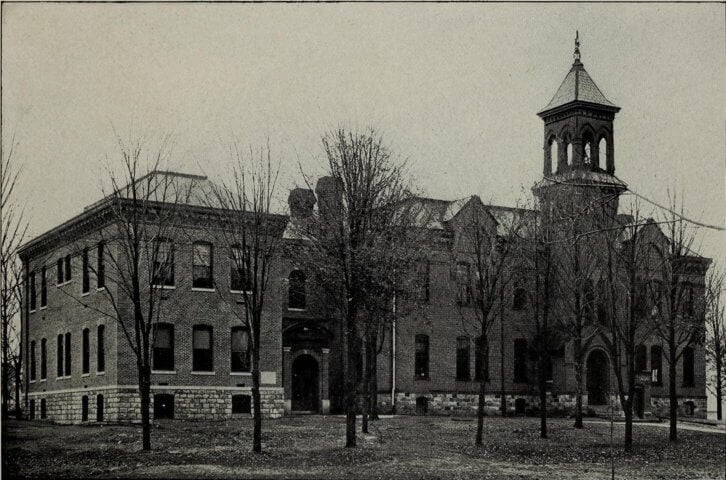 March 2, 2018 1 Comment
Angola High School yearbooks were named the Spectator up to about the year 1917, by 1925 they had taken the name The Key, and continued with that name through 1975. First published in 1905, by its senior class, the student yearbook format varies year by year. The 1906 class yearbook…
Read More 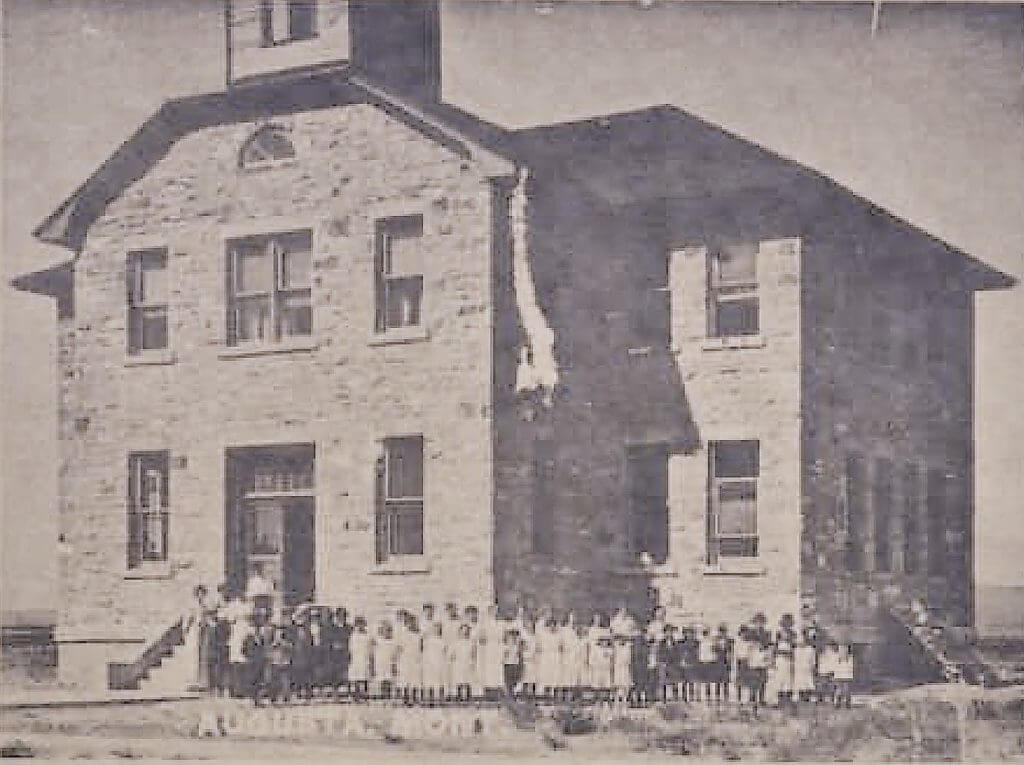 December 1, 2020 No Comments
The Abbe genealogy, as here published, is the consummation of Professor Cleveland Abbe’s life-long interest in the history of his family. Before reaching his twentieth year he began to collect items of interest about his ancestors and the collateral lines, and in spite of more or less interruption he has…
Read More

November 21, 2020 1 Comment
The first intention was to make a register of the descendants of George Abbot, Sen. only; but in their endeavors to collect documents for this purpose, the authors frequently obtained facts relating to the descendants of George Abbot, Jr., and intermarriages of the two families. In compliance with the requests…
Read More

The family of Jeremiah Carleton of Lyndeboro, NH and Barre, VT

Descendants of John Harris of Pennsylvania

November 13, 2020 No Comments
Free genealogy – Record of the Harris family descended from John Harris, born in 1680 in Wiltshire, England containing the descendants of John Harris of Pennsylvania. Full book, read or download it.
Read More

Descendants of Thomas Morris of Connecticut

November 13, 2020 No Comments
Thomas Morris arrived in Boston June 26, 1637. He took sail with a party of other Londoners and landed at Quinnipiac, now New Haven, March 30, 1638, arriving at their destination about the middle of April of that year. He purchased a tract of land near New Haven on the…
Read More

Names of foreigners who took the oath of allegiance to the province and state of Pennsylvania, 1727-1775

November 9, 2020 No Comments
A list of foreigners who took the oath of allegiance to the crown of Great Britain and the Province of Pennsylvania, from the year 1727 to 1775, with those to the State from the close of the Revolution. All males over sixteen years of age were obliged to take this…
Read More

Genealogy of the Lewis family in America

November 7, 2020 No Comments
About the middle of the seventeenth century four brothers of the Lewis family left Wales, viz.: Samuel, went to Portugal; nothing more is known of him; William, married a Miss McClelland, and died in Ireland, leaving only one son, Andrew; General Robert, died in Gloucester county, Va. ; and John,…
Read More

November 6, 2020 No Comments
In 1916 and 1917, William Montgomery Clemens edited a series of pamphlets called the Turner Family Magazine. It was meant to be a genealogical, historical and biographical magazine about the Turner family across the United States. That series of magazines was later published in 1920 as a complete bound volume.…
Read More

The Cox family in America

November 6, 2020 No Comments
Two volumes of Cox family genealogy combined as one. The first volume contains information about the various early Cox families across America. The second volume deals specifically with the descendants of James and Sarah Cock of Killingworth upon Matinecock, in the township of Oysterbay, Long Island, New York.
Read More

Record of the Smith family descended from John Smith

Giles Badger and his descendants

October 29, 2020 No Comments
In the following brief sketch of the Badger family it will he noticed that it is more of a genealogical than of a historical nature, a few facts as to occupation and prominence being noted as they came to the knowledge of the writer, he having commenced on this work…
Read More

The Czechs of Cleveland

October 17, 2020 No Comments
The Czechs (more commonly known as Bohemians) constitute one of the largest and oldest groups of immigrants which has made Cleveland its home. After the failure of the Revolutionary movement of 1848, some Czech leaders were compelled to flee the country, and others, despairing of the future under the House…
Read More

October 17, 2020 No Comments
The Boston Public Library has digitized numerous yearbooks for the high school in Malden, Massachusetts. These yearbook images they have placed online for everyone at Internet Archive. To facilitate your access we have provided links to the individual yearbooks, by year published, oldest to newest. All 105 of these yearbooks,…
Read More

October 1, 2020 No Comments
The Lake County Public Library has digitized all the yearbooks of Munster High School from it’s inception up until 2015. These yearbook images they have placed online for everyone at Internet Archive. To facilitate your access we have provided links to the individual yearbooks below, by year published, oldest to…
Read More

An Australian clan: the Nivisions of New England

The Descendants of Meredith Edwards of Westmoreland County, Virginia

September 26, 2020 1 Comment
A genealogical study of the Edwards family of Westmoreland, King George, Spotsylvania, Stafford, Prince William, Loudoun and Fauquier Counties, Virginia between 1665 and 1800. Traces the descent from Meredith Edwards of Westmoreland County (c.1655-1712) through his sons John, William and Thomas Edwards. Many later generations migrated to Kentucky.
Read More

September 24, 2020 No Comments
We begin our story in the year 1854 when the United States Congress organized the Nebraska Territory. Four years later, a law was passed defining the boundaries of its counties and locating their county seats. Merrick County now had a name and a county seat — Elvira. To the present…
Read More